Citroen delivers a baby brother to its big-selling Berlingo MPV. 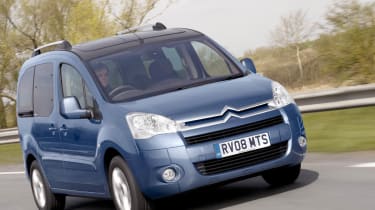 Dynamically, the MkII Berlingo Multispace is a massive improvement over its stablemate, offering a solid if uninspiring drive. If you can live with the slightly van-like looks and versatility is a key buying criteria, there is little to touch it. Young families will love it – the only problem will be remembering where you stowed all your stuff.

Surprise hits don’t come much bigger than the Citroen Berlingo Multispace. Since its launch in 1998 as the original five-seat value MPV, more than 50,000 have been sold – and demand shows no sign of slowing!

In fact, such is the Berlingo’s popularity, Citroen has given it a baby brother. Known as the MkII, the model sits alongside the top seller, rather than replacing it.

Crucially, though, there are some big differences. First up, it is not a van with windows but a proper car developed on the C4 chassis. This fact is obvious as soon as you start moving. The MkII is a huge improvement, with handling to match.

Versatility is even better. The five-seater is 24cm longer and 8cm wider than the standard car, and the larger cabin is filled with storage solutions. You get an overhead locker, and the acclaimed ModuTop ceiling bins are an option. You can even specify internal roof bars.

Countless bins and cubbies fill the floor, doors, seats and dash, and there are sloping centre console bottle-holders, plus numerous nets and carry hooks. Rear passengers even get tray tables. The large box between the front seats is big enough to take a handbag, and the whole thing can be removed and stowed in the roof locker.

The three rear seats split, fold and tumble individually, and if you need more space you can remove them to get a staggering 3,000-litre boot. Meanwhile, the load lip is so low that it’s virtually on the ground.

This would also make a great seat, with shelter from rain due to a tailgate that opens to the horizontal. It is well thought out – as is virtually every feature on this quirky but likeable car.

Rival: Tourneo Connect Despite its van-based chassis, the miniature Ford Transit is great to drive. It’s extremely practical, too, and feels well built. Only a slightly harsh ride spoils the package, plus it’s costly compared to the Berlingo.