If you look after the pennies, the pounds will look after themselves. It's a message that's certainly true when you buy Citroen's latest addition to the C2 range. That's because the 1.4 HDi is one of the most economical cars on the market today. 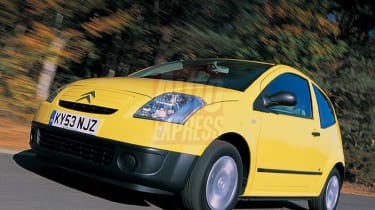 The HDi is an impressive addition to the C2 range, thanks to its exceptional economy and attractive purchase price. Don't buy it if you're looking for a lively warm hatchback, but if your top priority is cheap, economical transport, the Citroen fits the bill.

If you look after the pennies, the pounds will look after themselves. It's a message that's certainly true when you buy Citroen's latest addition to the C2 range. That's because the 1.4 HDi is one of the most economical cars on the market today.

The newcomer returns nearly 70mpg on the official combined cycle and, during our test drive, which included 209 miles of motorway cruising, reached the heady heights of 81.2mpg - and no, that's not a misprint. Starting out with a full tank, we then brimmed the car on the way to the test track after a drive up and down the A1(M). The tank took only 11.68 litres of petrol - that's just over two-and-a-half gallons.

But apart from one of the most fuel-efficient models ever driven by Auto Express, what else do you get for your £8,695? The answer is a remarkably stylish and refined supermini that looks good - even though the Sunshine Yellow paintwork of our test car certainly polarised opinion in the office.

The interior is also quite funky, but some of the plastics on the dashboard are brittle and unpleasant to the touch - which raises concerns about the car's build quality in the long term.

Performance isn't exhilarating, but it's respectable enough for the Citroen to keep up with traffic, thanks to an even torque curve that reduces the need for frequent downchanges. In town, the car can feel slightly breathless when pulling away from the lights, but otherwise the engine is fairly responsive and surprisingly refined when cruising at motorway speeds. Changing gears is easy enough, even though the box is let down by its vague, jerky action.

Handling is reasonable, although a combination of skinny tyres and light steering makes the newcomer unpredictable and prone to understeer when cornered hard. That won't be an issue to economy-conscious buyers, though, and as a bargain-priced, handy runabout, it has plenty to recommend it.