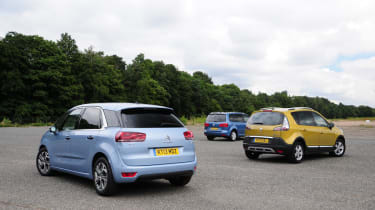 Versatility is a key ingredient when creating the perfect MPV, but it’s not the be-all and end-all if you want to make an impact in the class. Citroen has built a long line of versatile people carriers, yet the new C4 Picasso boasts a premium finish that has never been seen on the company’s MPVs before. Does this move upmarket put the newcomer a step ahead of the pack? We have two rivals that will put all of its talents to the test. First up is the Renault Scenic. It’s an MPV pioneer, and while the current car’s been around for a while, a facelift earlier this year introduced a restyled nose and new XMOD trim. This adds chunky, SUV-style detailing, while Dynamique TomTom models are well equipped. Meanwhile, if you want top quality, then the Volkswagen Touran brings all of the Golf’s attributes to the MPV class. We try the SE here, while BlueMotion Technology helps to boost the efficiency of VW’s familiar 1.6 TDI diesel. Can the new C4 Picasso make its mark? Read on as we reveal all...

1st Citroen The C4 Picasso is a great five-seat MPV that adds a premium edge to its winning combination of a spacious interior, innovative styling and efficient engines – and it does all this for a reasonable price. It comes within £500 of the Scenic, yet the quality and equipment make it feel like it costs thousands more. Citroen launched the Xsara Picasso MPV in 1999, and has since gone on to introduce both C3 and C4 models bearing the famous artist’s name. The latest C4 Picasso is based on an all-new platform, and is 140kg lighter than before – in fact, its kerbweight is now the same as the smaller C3 Picasso’s. Revised engines and a significant step up in cabin quality also mark out the newcomer.

2nd Renault An update has given the Scenic a new lease of life, while the XMOD revisions make this version more appealing than the standard model. It’s not the most spacious MPV around, but it still has plenty of family-friendly touches. We just wish the 1.5 dCi was a bit more potent, and that there was more kit. All compact MPVs owe their existence to the Renault Scenic. The car was introduced in 1996 as an enlarged version of the Mégane, and while subsequent models have used similar styling cues to the original, the Scenic has transformed from a pumped-up hatch to a hugely versatile people carrier.

3rd Volkswagen There’s little wrong with the Touran, it just feels dull. Build quality is hard to fault and it’s spacious, but we’re mystified as to why you must pay extra for two fewer seats on a car that’s more expensive and nowhere near as well equipped as its rivals here. Higher running costs confirm the VW’s relegation to third. The Volkswagen Touran was introduced in 2010, and is based on the Golf MkVI. It’s offered in five and seven-seat forms, although strangely you have to pay extra for fewer seats. Diesel models feature BlueMotion Technology extras that help to reduce running costs.

These cars all have three individual seats in the back row that slide and fold independently, and you can adjust them for luggage or passenger room. The Renault’s and VW’s can be removed for maximum space, although they’re heavy and fiddly to relocate, and you’ll need somewhere to store them. Seatback trays are standard on the Citroen and VW, but they’re part of the £60 Comfort pack on the Renault.

The Renault and Citroen are well ahead of the VW for hi-tech screens. While the Touran makes do with conventional instruments and a touchscreen, the Citroen and Renault’s high-resolution TFT displays can be adjusted to show different data. The C4 Picasso has the edge over the Scenic for image quality, though.

The Touran is the model to go for if you want maximum boot space, although you have to remove the back seats to achieve this. It’s also the only car here with a roll-back load cover – Renault and Citroen have fixed parcel shelves. Despite its large size, the C4 Picasso’s tailgate is easy to open and close, although Citroen does offer a powered tailgate for £400 on Exclusive-spec cars.