Stop-start version of latest family car aims to clean up 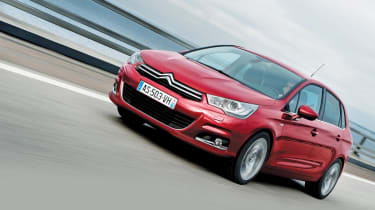 FROM the outside, this diesel hatch doesn’t make a song and dance about its eco credentials. However, beneath the surface, technology such as stop-start and regenerative braking works unobtrusively. The Citroen is also spacious, comfortable and neatly finished. On the downside, the standard-fit EGS auto is jerky, and the 110g/km CO2 figure misses the tax-free 100g/km target achieved by similarly priced cars such as the VW Golf BlueMotion. Cash-conscious C4 buyers would be better off with the 90bhp version of the 1.6 HDi with its £2,000 saving, manual gearbox and similar economy.

French giant Citroen is proving how low it can go with an eco-friendly version of the C4 hatch. We drove the flagship diesel in Issue 1,133, but this is the model bosses are most proud of.

The e-HDi uses a 1.6-litre oil-burning engine, instead of the 2.0-litre unit, and packs all the firm’s eco know-how under the bonnet to save fuel and slash CO2 emissions. But does this economy variant make sense?

The biggest contributor towards the 67mpg and 109g/km CO2 figures is Citroen’s version of stop-start technology, which cuts the engine in traffic. Put your foot on the brake, and below 5mph the engine will cut out – as long as there aren’t too many electric gadgets in operation. In the time it takes to move your foot back to the accelerator, the engine is running again and you’re off. In the sparsely populated Swedish city of Malmö where we drove the C4, the digital dash readout recorded that the engine was off for seven minutes in only half an hour of driving, proving how the pauses can mount up in urban situations.

Another advantage when the roads are busy is the automatic gearbox, fitted as standard. Called EGS, it’s essentially a manual that shifts itself for optimum economy. Alternatively, pull the small chrome lever and use the steering column paddles to swap the cogs yourself.

As with most automated manuals, changes are slow and jerky, although as the C4 is designed for a more relaxed driving style, owners probably won’t mind. Responsive steering stops the experience from feeling too disconnected, but this is a car that takes comfort seriously. It even comes with two types of foam hardness in the front seats – firm for the outer wings, for better grip, and softer for the base. The engine sounds rather coarse and undoes some of the work Citroen has put into cutting road noise. That aside, the cabin is superb. Dash materials are of a high quality and it is well equipped – even the mid-spec VTR+ gets rear parking sensors and Bluetooth connectivity.

Rival: Toyota Auris HSD NO hatch in the class can beat the Auris hybrid on urban economy. Combining a 1.8-litre petrol engine with battery power, it feels faster, returns 74mpg and puts out only 89g/km of CO2. It matches the C4 on price and comfort, too.