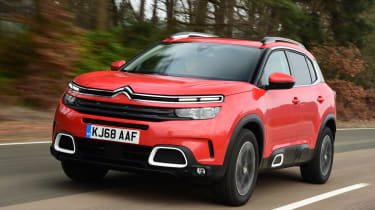 The Citroen C5 Aircross should be praised for its uniquely plush take on the family SUV formula. It is totally unpretentious in its design, disregarding driver engagement in favour of solid comfort. However, a Peugeot 3008 is better to drive, has a higher-quality feel and is more composed in day-to-day use. Unless you live on a street lined with potholes and speed bumps, the Peugeot is a better bet.

Citroen has traded on a reputation for comfort and refinement for decades. Rather than targeting a compromised sporty dynamic, the French firm’s slack suspension and plush seats offer something different in a market blinded by driver engagement.

But for many new car buyers, the way a large family SUV handles on a race track is about as relevant as cabin and boot space in a two-door sports car. Citroen’s latest crossover, the new C5 Aircross, aims to capitalise on this quandary.

We’ve tried a couple of versions already. While our early Chinese-spec car raised a few quality concerns, a much longer drive in a European model late last year showed great improvements with regards to fit and finish. 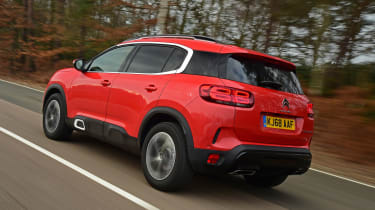 But the biggest question remained: what would Citroen’s largest SUV be like to drive back in Britain? Our notoriously pock-marked tarmac can unsettle even the most competent and composed cars, so the Aircross has its work cut out to topple the Peugeot 3008 and Skoda Karoq.

Under the bonnet is a familiar range of turbocharged petrol and diesel engines. The PureTech 130 tested here is a unit we know and like, offering plenty of punch, decent refinement and low running costs. Even in a car of this size, it never feels breathless, ticking along happily at motorway speeds.

No version should break the bank to run, with entry-level petrol models capable of around 40mpg. The diesels will suit higher-mileage drivers, but are subject to the four per cent company car tax surcharge. 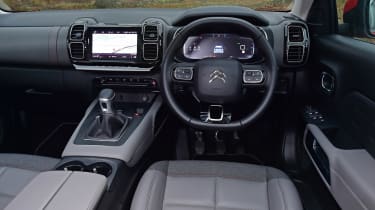 Our petrol car was incredibly quiet – so much so you’d be hard pushed to know if it was running at idle without glancing at the rev counter or prodding the throttle. And it remains hushed until you really wring it out.

The Progressive Hydraulic suspension does a decent job of ironing out lumps and bumps around town, but deeper potholes can upset the balance because the dampers struggle to react in time – sending an unwelcome wobble through the cabin.

This set-up, while not conducive to on-the-limit handling, makes the Citroen SUV a commendable high-speed cruiser. Any sudden input – be that steering, accelerating, changing gear or braking – can cause the car to pitch or wallow, but take things easy and you’ll find it an impressively cosseting place to be.

However, the comfortable ride isn’t matched by an ergonomic driving position. Again, things are fine at steady speeds, but changing gear feels like a cumbersome process, due to the height of the centre console. Although it’s not something we noticed in the automatic cars, constant engagement with the lofty manual gearlever – around town, for example – can prove tiresome. The long, baggy throw doesn’t help matters, either.

The rest of the interior seems logically designed, however, with a big touchscreen and a nice digital dash panel. Those moving from older models will revel in the myriad connectivity options, but the lack of physical climate control buttons is a continued frustration of many PSA cars.

On a monthly PCP finance deal, the 3008 and C5 Aircross are separated by a hair’s breadth, with both costing around £338 over 48 months and 10,000 miles per year. That central screen is standard on all Citroen models, and every version comes with Apple CarPlay and Android Auto. Basic Feel cars offer rear parking sensors, 17-inch alloy wheels and a full suite of safety kit, including autonomous emergency braking. 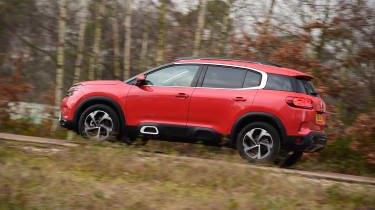 Step up to Flair and you’ll add bigger rims, an integrated dash cam, sat-nav and tinted windows. Flagship Flair Plus gets keyless entry, a panoramic roof, wireless phone charging and an automatic bootlid.

Raise that tailgate and you’ll uncover a generous 580-litre load area. That beats the Karoq even without sliding the seats forward, although doing so reveals a more impressive 720 litres. Folding the seats gives a Skoda-matching 1,630 litres.

Room in the back is adequate. There’s no seven-seat model yet, which is a shame – especially as the larger Skoda Kodiaq and Peugeot 5008 satisfy such needs – but the rear bench is big enough to carry kids and average-size adults in relative comfort. The flat floor helps, while sliding the bench back should help those with long legs. Cabin storage is good, with various pockets and a big central cubby for loose items.