Big French cars have struggled in recent years. Awkward styling, floaty road manners and questionable reliability tend to contribute to dismal sales. Citroen's C5 is a case in point, so the manufacturer has given its flagship a thorough going over to see if it can improve the model's showroom appeal. 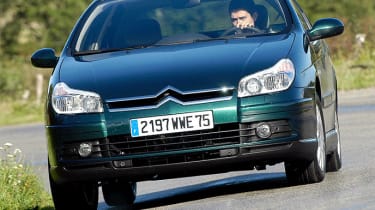 For most buyers, the C5 simply won't make the grade. While it offers plenty of space and a class-leading cruising ride, its chassis is left behind by more dynamically capable rivals on a twisty road. Its sharp new style helps it look better than ever, but only some hefty cashback discounts will make it a truly viable proposition.

Big French cars have struggled in recent years. Awkward styling, floaty road manners and questionable reliability tend to contribute to dismal sales. Citroen's C5 is a case in point, so the manufacturer has given its flagship a thorough going over to see if it can improve the model's showroom appeal.

And there is no question that the restyle at least has been a success. In adding the fresh corporate face and swept headlamps of the C4 to the front, along with the double-chevron grille, designers have finally given the C5 an identity. The new look is neatly finished at the rear with striking boomerang-shaped lamp clusters.

Inside, the changes are less significant, although the chrome-rimmed dials with a new typeface give the driving environment a lift. Despite the C5's increase in length - it is 12cm longer than its predecessor - the cabin is no bigger, as it is the front and rear overhangs which have been extended for safety reasons. The boot is still huge, though, and there is plenty of cabin space for both front and rear passengers.

The C5 is all about comfort. Numerous subtle changes to the Citroen's sophisticated Hydractive suspension system have further improved what is already one of the smoothest-riding vehicles on the market.

Steering It's just a shame the modifications couldn't have sorted out the C5's Achilles' heel - its cornering ability. There is no shortage of grip, but the steering gives so little feedback that it's hard to know exactly what the front wheels are doing. It's claimed that it has been improved, but it is still woeful in comparison to virtually all rivals.

Fortunately, the revised engine range has had a more successful makeover. As well as the existing 1.8, 2.0 and 3.0-litre petrol variants, C5 buyers have a choice of three diesels - new 1.6 and 2.0-litre units as well as the older 2.2 oil-burner. Those looking for value for money will no doubt opt for the entry-level 1.6 driven here. The unit is already used in Ford's Focus C-MAX and Peugeot's 407, and produces just as much power as the outgoing 2.0-litre model which it has replaced.

Despite its modest size, the 1.6 is smooth and punchy on the road, becoming coarse only at high revs. A 0-62mph time of 11.5 seconds is impressive given the C5's size, while fuel economy of 51.4mpg makes this the most frugal model in the line-up.

Customers will have some upmarket toys to choose from, too. A £1,600 luxury pack includes heated leather seats plus a lane-departure warning system also fitted to the new C4. Sensors detect if the driver strays out of a given lane without indicating, and send a vibrating alert through the seat. While the feature works well, many owners will be pleased to learn that it can be turned off.

Revised prices are still under wraps, but changes are said to be minimal. Once the usual cashback discounts have started, value for money is one thing the big Citroen is likely to have on its side. But is that enough to make it a success?