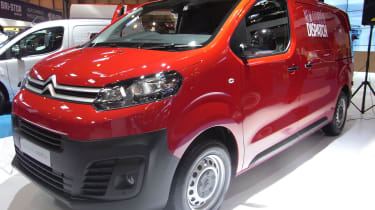 Citroen has debuted the new Dispatch panel van at the 2016 Commercial Vehicle Show, releasing pricing and spec details at the same time. The new Dispatch range will kick off from £17,495 in the UK for a short-wheelbase van powered by the BlueHDi 95 diesel engine - identical to its Peugeot Expert sibling.

Prices rise to £25,145 for a top-spec Enterprise variant powered by the top diesel engine. All Dispatches will be diesel-powered, using Citroen's efficient range of BlueHDi units. Power outputs range from 94bhp right up to 178bhp, with a choice of manual or two automatic gearboxes depending on model. An electric version is said to be coming soon, to rival vans like the Nissan e-NV200.

The NEC will play host to the Dispatch alongside its near-identical new Peugeot Expert sister vehicle ahead of sales for both beginning later this year. The Toyota Proace, also on display, is spun off the same EMP2 platform, a joint venture between the three brands. 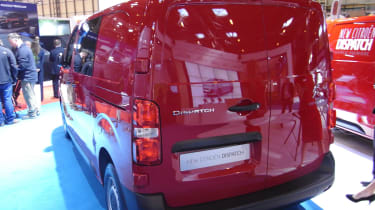 The 1.9m tall Dispatch is available as a traditional van as well as in Combi and Crew cab versions, with three lengths - 4.6m, 5.95m and 5.3m. The maximum payload capacity is 1,400kg, there's 6.6m3 of load volume and the Dispatch can tow up to 2,500kg. Citroen has said that there won't be a high-roofed version coming in the near future, though, so those who need more space will have to buy one of Citroen's larger Relays.

Sitting above the Berlingo and below the Relay, the most efficient version of the Dispatch (the BlueHDI 115 stop/start manual) manages 55.4mpg and emits 133g/km of CO2. All engines use AdBlue tech to reduce harmful emissions, while Citroen claims best-in-class lightness contributes to those figures. 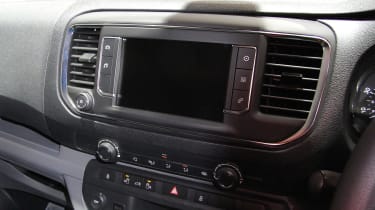 Like on its cousins, a raft of clever features will be available on the Dispatch. 'Moduwork' is a specially-designed front passenger seat that can be lifted to extend the maximum load length by 1.16m, while sector-first hands free sliding doors can be opened by waving your foot under the rear bumper.

Buyers can spec a seven-inch touchscreen with voice control, sat-nav and 'Mirror Screen' tech that is compatible with Apple CarPlay and MirrorLink.

Car-like tech such as 180-degree Park Assist, a head-up display and adaptive cruise control is also available on the Dispatch, while active safety tech like Active Safety Brake and road sign recognition can be specced. The Peugeot Expert was awarded five stars in Euro NCAP safety tests as a result, and the Dispatch should achieve the same.

Get all the latest van news and reviews in the Auto Express van channel...