The new Citroen SpaceTourer is the MPV version of the Dispatch van, but how does it drive on British roads? 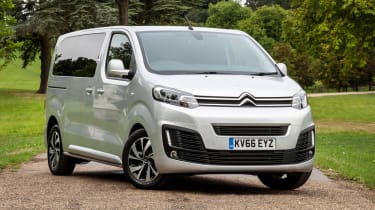 The Citroen SpaceTourer is mainly aimed at taxi and transport companies, but as a passenger car with nine seats it’s a decent choice. There’s lots of space for passengers, and while the price is a bit high, the mix of economy, space and equipment is a strong combination.

The arrival of the new Citroen Dispatch van is good news for those looking for a car with more than seven seats, as there’s a new passenger-carrying version too. It’s called the SpaceTourer, and like the Dispatch, it shares a platform with the Peugeot Expert and Toyota Proace.

There are three options, ranging from 4.6m to 5.3m in length, with five, seven, eight or nine seats. We tried the nine-seater in Business trim, which is aimed at commercial buyers and taxi drivers – but there is also a ‘Feel’ version for private buyers. This model gets more hard-wearing materials inside such as the rubber floor mats. 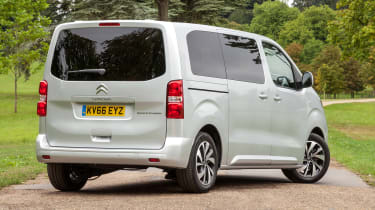 The interior is basic, but not ugly, and there’s plenty of space in the passenger seats. Even tall passengers will have acceptable legroom in any seat, and shoulder room is good too. It comes at the cost of boot space, as there’s only a small luggage area with the seats up - but fold them down and it’s it doubles as a van with 2,381 litres of space. The XL version is even bigger, with 2,932 litres in total.

Clearly this is the purpose of the SpaceTourer, and it lives up to the name, but what you don’t usually get in these kind of vehicles is a car-like interior. While the SpaceTourer can’t hide its van origins, the well-finished dashboard and seven-inch touchscreen display (with DAB radio, Bluetooth and Apple CarPlay) fitted on our test vehicle do give it a more upmarket feel. Standard equipment is good, with remote central locking, ISOFIX child seat mountings, Hill Start Assist, cruise control, parking sensors, LED daytime running lights and a USB port.

Plus, the SpaceTourer doesn’t feel as van-like as you might expect on the road. This M version felt smaller than anticipated on some tight country roads, and the small turning circle means it’s easier to park as well. Visibility isn’t bad, especially thanks to the high-up driving position.

It rides well, and while we weren’t able to test it with a full load of passengers on board, the SpaceTourer handled a set of bumpy British roads rather well. It’s noisy inside, with very little in the way of sound deadening, though. 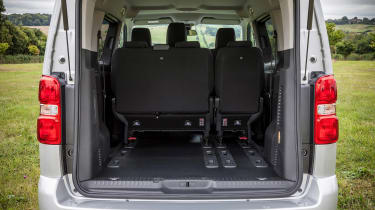 The diesel engine is punchy enough, and pulls very well from low in the rev range. The six-speed manual box has a decent shift but it’s not as slick as the one you’ll find in a Volkswagen Caravelle. It’s easy to use, at least, and matches well with the light – but slightly vague – steering.

Impressive economy of 53.3mpg and emissions of 139g/km means it has a BIK rate of 27 per cent. That’s good for a nine-seater, but the list price is definitely high if you’re buying privately. There’s no avoiding the fact this is still a van with windows, rather than a very large car.