A full buyer's guide for the Hillman Imp (1963-1975) including specs, common problems and model history... 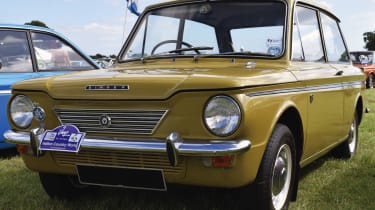 You might be wondering why the Hillman Imp has such a bad reputation. This spacious four-seater supermini is fun to drive, costs very little to run and buy, and it looks super cool today. The reputation stems all the way back to the production issues early on in the car’s life.

Like a lot of British cars, the Imp suffered some very serious production issues when it was introduced in 1963. Most of the car’s issues were solved by 1965 when the much-improved Mk2 cars went on sale, but the poor reputation remained.

It might not have featured the truly innovative layout and drivetrain, but the Imp could be considered one of the Mini’s toughest rivals. In many ways it was more practical, and the rear-engined layout made the Rootes car highly tunable and fun to drive. Its top-hinged rear window allowed it to carry far more than a car of its size could realistically be expected to, and handling was brilliant thanks to a low centre of gravity. The Imp definitely deserved better.

Which Hillman Imp to buy?

The most sought after Imp derivatives are the vans and estates, but not far behind are the Sunbeam Stiletto and Imp Californian, along with anything that features the twin-carb Sport engine. If you’re on a budget, don’t be put off buying a regular Imp saloon or a Singer Chamois; you’ll get an immense amount of fun per pound.

In terms of upgrades worth seeking out, some owners upgrade their brakes by fitting the larger servo and master cylinder of the Imp Sport. Helping the engine to breathe more easily is a good move; a free-flowing exhaust is worthwhile, along with a K&N air filter. Fitting an electric fan is also worthwhile; it aids the efficiency of the cooling system while also reducing engine drag.

• Corrosion: most areas of an Imp’s bodyshell can rust; start with the leading edge of the double-skinned bonnet, the door bottoms, front and rear wheelarches plus the base of the inner wheelarch.

• More corrosion: also check the entire floorpan, the rear suspension pans (where the coil springs are located), the spring mounting points and the box-section swing axles up front. • The all-aluminium engine lasts well if anti-freeze levels are maintained; Old antifreeze will quickly eat into the alloy, and block the radiator causing it to overheat.

• Head gasket: look for head gasket failure by looking at the underside of the oil filler cap for mayonnaise. Another important check is the coolant level itself. If it drops below the base of the header tank, the engine will overheat and the block can warp as well as the cylinder head.

• Cylinder head: as you accelerate, listen for pinking when the engine is under load. This usually points towards the fact the cylinder head may have been skimmed too many times. The only fix is a decent used head. Alternatively, the ignition timing might be out.

• Engines: post-1966 engines got a stronger block, which is much less prone to deforming if it overheats. See if the top of the cylinder block features a straight edge or a curly one. If it’s the former, it’s got the stronger block. 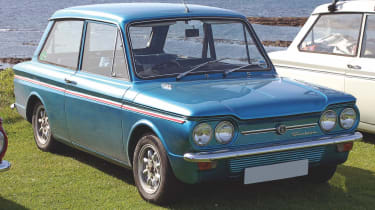 • Exhaust smoke: start the engine from cold and check for blue exhaust smoke. Most of the time this points towards worn out inlet valve seals. The Sport has no valve seals, but its valve guides wear out instead – they’re cheap and easy enough to replace though. If the smoke doesn’t subside, the piston rings or cylinder bores have worn, which requires an engine rebuild. It’s not a difficult job, or you could buy an exchange rebuilt engine for reasonable money.

• Temperature: when out on the road, get the car up to temperature. Watch the gauge, which should rise fairly quickly and sit at just below half at speed. If very slow to rise, or it doesn’t get above a quarter, the thermostat is either stuck open, or has actually been completely removed to hide other cooling issues.

• Water pump: the water pump should have been changed within the last 25,000 miles; they fail even more quickly on rarely used cars, as the bearings fail so the engine then loses most of its cooling.

• Leaks: oil leaks are very common, but shouldn’t cause too much concern – the all-alloy engines and gearbox housings put more stress on all of the seals. There’s no rear crank seal, so expect some minor leaking – but much more suggests there may be a deeper problem.

• Gearbox: all Hillman Imps came with a beautifully-engineered four-speed manual gearbox from the factory. Changes should be precise and smooth, although the nylon bushes seated directly below the gearstick have most likely worn.

• Synchros: all four gears got a synchro, which has probably worn badly on the first two. Thankfully a rebuild is fairly straight forward.

• Couplings: the driveshafts feature rubber rotoflex couplings which perish. There aren’t any tell-tale signs, but a visual check will show if the rubber has perished or split. Fit only heavy duty replacements, cheaper items will prove to be a waste of time.

• Steering: the Imp’s steering should be light and precise. If the wheel is stiff to turn, or there’s play, it’s likely that the kingpins and bushes are tired.

1966: 52bhp Singer Chamois Sport arrives on the scene, with the Sunbeam Imp Sport.

1968: Yet another facelift for the Imp, with different gauges and new trim for the Mk3.

1976: Production of the Hillman Imp stops.

A standard Imp can range anywhere from £300-£3500, depending on condition. A project at less than £1000 could be good value if you can do the work yourself, but it’s usually better to go for a good solid car from £1500-£2500. Rarer Singer versions, especially in sport trim, can fetch more money – but all represent great value.