A full buyer's guide for the Triumph Herald (1959-1971) including specs, common problems and model history... 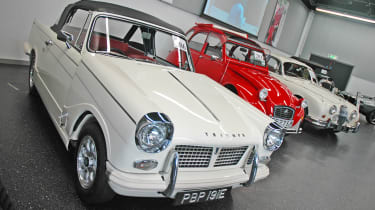 The Triumph Herald burst onto the scene in 1959 and instantly became a family favourite. Although the company took what was considered to be an old-fashioned approach to construction – basing this new saloon on a separate chassis – it quickly became popular choice, offering a cheap and stylish form of transportation.

Styling by Giovanni Michelotti was very modern and forward thinking at the time, and it still looks great today. Although based on a separate chassis, the Herald was advanced in other areas such as the independent coil spring front suspension, rack and pinion steering as well as independent rear suspension by transverse leaf spring.

With a choice of two-door saloon, coupé, convertible and estate bodystyles, there was something for everyone, and while performance wasn’t gut-busting thanks to the 948cc engine, from 1961 there was also an 1147cc powerplant for those wanting more go – later on there would be a 1296cc unit.

While the Herald made a great new buy back in the 1960s, it makes great classic transport now thanks to superb parts availability, easy maintenance and excellent practicality. With independent suspension all round, a turning circle tighter than a London taxi’s plus disc brakes on most models, the Herald is more capable dynamically than its reputation would have you believe.

Which Triumph Herald to buy?

No Herald is sporty, as the largest engine offers just 61bhp. But upgrades for a bit more go are simplicity itself – it’s easy to slot in Spitfire mechanicals, tune a Herald engine or you could go for the six-cylinder edition instead, the Vitesse. Mechanically similar to the Herald, you’ll need slightly deeper pockets to secure a Vitesse, but the premium isn’t that great.

All Heralds featured the same four-speed manual gearbox, with synchromesh on all gears except first. No Herald was available with overdrive from the factory, but there are plenty of cars about that have been converted to a Spitfire transmission – it’s worth seeking out one of these.

With its Meccano-like chassis-based construction, it’s common for a Herald to consist of parts from multiple cars, so don’t worry about Spitfire engines or gearboxes, Vitesse back axles, or even a Vitesse chassis underneath a Herald bodyshell.

Some cars have been converted into dropheads, and it’s no problem if done properly and you’re not paying genuine convertible money. On that note, it’s a myth that the convertible has a stronger chassis than the saloon; they’re interchangeable, but the Vitesse features slightly bigger brakes up front.

• Chassis: while scruffy cars might not be pleasing to look at, the bodywork doesn't provide any strength - so as long as the chassis is strong and rust-free, there are no safety issues. The chassis can suffer from rot however, and you'll have to remove the bodyshell to repair the outriggers and main chassis rails that are likely to show signs of corrosion thanks to a dirt trap near the differential.

• Corrosion: check everything you can for rot, but pay particular attention to the floorpan and door bottoms. Other problem areas include the front valance, as well as the front corners of the bonnet. Be sure to check around the spare wheel well, as water can collect with rust quickly forming.

• Panel fit: if good shut-lines are a must for you, then be prepared for a long wait! Most Heralds suffer from poor panel fit, even original ones, and if the car has had a body-off restoration it can be extremely difficult to line everything up. It's generally something you can learn to live with though...

• Engines: the engines are durable, but a filter with a non-return valve must be fitted, or the big-end bearings will wear quickly, betrayed by rattling at start up. Once this has happened, a bottom-end rebuild is the only solution.

• Thrust washers: a common failing of the 1296cc engine is worn thrust washers. If these let-go it could write off the engine block and crankshaft. An easy test is to rock the front pulley, and if you can feel any movement expect to make some repairs

• Suspension: the front suspension can give trouble, but it’s all cheap and easy to fix. The nylon bushes in the brass trunnions wear, while the trunnions themselves wear if they’re not regularly lubricated with EP90 oil. Without this, water gets in and corrodes the lower portion of the vertical link, weakening it so the suspension collapses.

• Suspension bushes: the rubber suspension bushes perish, the anti-roll bar links can break while the wheelbearings wear along with the track rod ends, plus the steering rack and upper ball joints – but they’re all easily and cheaply replaced.

• Leaks: if the car has been leaking oil for some time (and a lot do have the odd leak) the rubber steering rack mounts may have softened from the contamination. You will feel plenty of play in the steering if they are worn, but you can get under the car and check for movement to confirm the issue

• Wheelbearings: although effectively a service item, special attention should be paid to the rear wheelbearings. While they can be difficult to replace (a special press is required), if not attended to quickly the driveshafts will need to be scrapped thanks to a design flaw.

1961: The Herald 1200 (with 1147cc engine) replaces the 948 edition, although the entry-level Herald S continues with the smaller engine. In the same year, an estate is introduced with the 1147cc engine.

1964: The coupé and Courier are dropped.

Unlike many cars from the same era, the simple and fun Triumph Herald has remained relatively affordable. There are a fair amount of projects around from the £500, and these represent a fun winter project for the ambitious DIY mechanic. Spend £1500-£2000 to get something with an MoT in rough to ‘usable’ condition, while there are good condition saloons north of the £3000 mark.