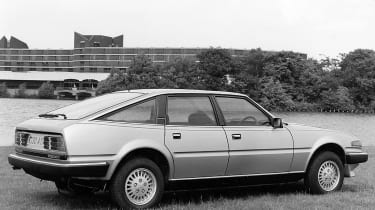 The history of the British motor industry is littered with heroic failures, but if there’s one that really deserved to succeed above all of the others it’s the Rover SD1. European Car of the Year in 1977, the SD1 was a brilliant concept; a luxurious and spacious large hatchback that could carry a family and their luggage in comfort.

The focus was on six- and eight-cylinder engines (although a four-cylinder unit and a diesel were offered too), so relaxed cruising was the order of the day. The last Rover to be designed by David Bache, the SD1 went its own way at a time when most executive cars were staid three-box saloons.

But as well know, the industrial strife of the time was what put paid to any chance the SD1 might have had of becoming a success. Low-quality parts were screwed together with no love whatsoever, which is why instead of the SD1 saving Rover, it would be another nail in the coffin.

Decades after the SD1 went out of production there are few really good survivors as values have been ultra-low since the car was still in production. They’re creeping up now though, as the SD1 begins to become appreciated by collectors.

Which Rover SD1 to buy?

It’s the twin-plenum Vitesses that get all of the coverage and while these are the best to go for if you can find a good one, the reality is that any cherished V8-powered SD1 will be great to own thanks to that effortless torque. Because the V8s are the ones that everyone wants, make sure you’re buying a car that left the factory as a V8.

The latter is given away by a chassis number starting with SARRRE, the E giving away the fact that it’s a Vitesse. Don’t be too quick to dismiss a six-pot SD1 or even a four-cylinder O-series edition. The former is smooth and provides relaxed cruising abilities and even the 2000 has more grunt than you might expect.

Few early cars survive because corrosion was such an issue; later cars were built to a far higher standard, but serious rust can still be a problem. Later cars also got improved electrics and interior trim, but the amount of extra equipment can impact on reliability.

• Rust: corrosion is the norm, especially on earlier cars which can be spectacularly rusty. Check the obvious places first; the wheelarches, sills, front and rear valances, floorpans and door bottoms – especially the rear in the case of the latter. The scuttle also needs close inspection, the tailgate (everywhere) and the MacPherson strut tops.

• More rust: a careful inspection from underneath the car is essential, especially to get a closer look at the rear suspension trailing arms which can separate from the bodyshell thanks to corrosion. Rust and cracks in the arms are common too.

• V8 Engine: the Rover V8 that powers most of the SD1 has a tendency to overheat if anti-freeze levels aren’t maintained. Internal corrosion leads to the waterways and radiator getting blocked up. Regular oil changes are also key on the V8, to prevent camshaft wear.

• Six cylinder engine: the six-cylinder engine (derived from the Triumph 2000/2500 unit) is hugely durable if the oil is replaced frequently, but if it isn’t the restrictor valve in the camshaft oil feed gets blocked up, leading to rapid and serious camshaft wear. Removing the restrictor is worthwhile, but this means removing the cylinder head first. These engines are also belt-driven, so make sure it’s been renewed within the last five years or so.

• Manual gearbox: the five-speed manual gearbox fitted to most SD1s is tough but wears eventually. If there’s rumbling with the clutch up in neutral the layshaft has worn, which means a full rebuild is due – or a decent used unit needs to be sourced.

• Automatic gearbox: the Borg-Warner automatic gearbox isn’t all that strong, so be on the lookout for jerky changes or hunting. You’ll be doing well to get more than 60,000 miles out of one of these transmissions but decent used replacements aren’t costly and neither is a complete rebuild.

• Steering: power steering leaks aren’t rare so squeeze the rubber gaiters at each end of the rack. Any sign of fluid gushing around inside these and a replacement rack will be needed.

• Trim: the interior trim is reasonably hard-wearing but dash tops tend to warp if left in the sun and the same goes for the door trim panels. Decent replacements are hard to find.

• Electronics: later cars came with plenty of equipment but unfortunately the electrics were always an SD1 weak spot. So check that everything works – the windows, heater, rear wiper, central locking and sunroof – the latter also tends to leak, just to add to the fun.

• Alternators: cooked batteries aren’t unusual thanks to dicky alternators which charge at too high a voltage. It’s worth putting a voltmeter across the battery with the engine running; it shouldn’t be any higher than 14.8 volts.

1982: SD1 Series 2 brings bigger rear window, smoother front end with flush-fitting headlamps, bigger bumpers and a 2.0-litre four-cylinder engine. Soon after there’s the diesel-powered 2400SD too, just before the 2600SE and Vitesse are introduced. The latter has a 190bhp fuel-injected V8 and lowered suspension.

Although the purest design and the rarest of all SD1s, the early Series 1 models are generally no more valuable than the more usable Series 2 cars. The V8 engined models, either S1 or S2, are by far the most sought after and are usually worth up to 25 per cent more than the 2600/2300 models.