We get behind the wheel of Britain's cheapest new car, the Dacia Sandero supermini 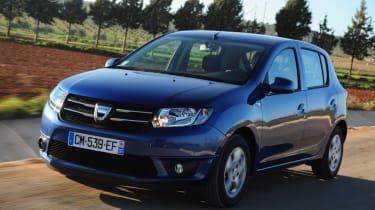 Even in top-spec trim and with sat-nav fitted, the Sandero costs around £800 less than the cheapest Ford Fiesta, which is gob-smacking value for money. But it’s not all about the rock-bottom price tag - interior quality is better than expected and the way it drives is calm, quiet and composed, too, so long as you don’t push it too hard. Factor in rear seats and a boot that’s among the most spacious in the supermini class, and the Sandero is an accomplished new car, for the price of a used one.

Dacia doesn’t like the word cheap, it prefers ‘affordable’. But whichever way you look at it, the new Sandero, starting from £5,995, costs less than any other new car on sale in the UK.

The Fiesta-sized supermini joins the Duster SUV in Renault’s budget-brand line up and promises to deliver the same mix of practicality, no-frills styling and shockingly low prices. But does a cheap price tag translate to a dreary experience on the road?

Anyone who’s taken an interest in the new Renault Clio will recognise the Sandero’s engine line-up. A 74bhp 1.2-litre petrol (the only option for the entry-level Access model) kicks off the range, followed by the three-cylinder 89bhp 0.9 TCe and, for the first time in a Dacia, a diesel engine is offered – a 89bhp 1.5 dCi that's capable of returning 74.3mpg and 99g/km.

We went for the turbocharged three-cylinder – the most promising on paper with a 0-62mph time of 11.1 seconds, a full second quicker than the diesel. It’s an engine that’s already impressed us under the bonnet of the new Clio, and fitted to the Sandero it’s a similar story.

At idle and on light throttle it hums away quietly in the background and pulls well from low revs – disguising its meagre cylinder count. Only when you hold onto a gear and charge towards the limiter does it let loose a characteristic thrum from under the bonnet.

Controlling the car at higher speeds isn’t quite as fun as getting there – there’s a delay between steering inputs and changes of direction, plus plenty of body roll on turn in - lucky then that all cars come with ABS, ESC and four airbags as standard. Keep things sedate, though, and the ride is extremely comfortable, while refinement is nearly a match for the new Clio at motorway speeds.

To drill down the price Dacia’s designers were forced to keep the styling as uncomplicated as possible – the same windows are used on every Dacia model for example. So while it won’t win any beauty contests, it’s unlikely to offend anyone or draw any unwanted attention either.

Interior quality is better than expected – the materials aren’t soft touch, but they don’t feel brittle or scratchy either. Our top-spec model even came with an attractive graphite finish around the centre console and well-sculpted front seats.

There’s plenty of space, too. The 320-litre boot, which expands to 1,200 litres with the 60/40 split rear bench folded, is 54 litres bigger than the new Clio, and three adults can fit across the rear bench at a squeeze.

Equipment levels are remarkably generous, as long as you don’t go for the stripped back base-spec car. That does without electric windows, air-con, a stereo and comes in just one colour combination – white with black bumpers. Most customers however will want to add some extras, especially as they won’t cost you much more.

Moving up to mid-level Ambiance trim costs just £600 extra, but adds a radio and CD player, a USB input and Bluetooth, as well as remote central locking, electric front windows and body-coloured bumpers. You’ll even get trims for the 15-inch steel wheels and chrome surrounds for the air vents in the interior.

Our test car was decked out in range-topping Laureate trim, which costs around £2,000 more than the entry-level car but adds luxuries like air-con, electric mirrors, cruise control and electric windows all round. A handful of options can be added on top of that, too, including an easy-to-use seven-inch built-in sat-nav that's a snip at £250, as well as leather upholstery for £600.