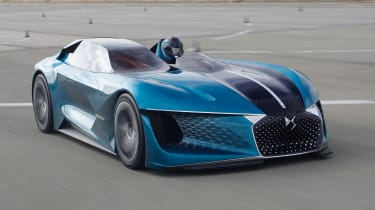 Is this really how we will be driving in 2035? Who knows? The DS X E-Tense is a fanciful vision of what cars could be like in the future. On a practical level the X E-Tense is a tangible link to DS’s efforts in the world of Formula E, as beneath the wacky concept it’s based on the firm’s Formula E racer. But on a simply amusing level, it’s a well-made, exciting idea of not just a car of the future, but also where the fledgling DS brand is heading.

Concept cars fulfill an important role for any self respecting car manufacturer. Often they’re little more than a showcase for the type of design future models will be wearing, but the DS X E-Tense from DS Automobiles is a little different.

DS says the X E-Tense is a preview of the types of cars we may be buying in 2035; and it’s not just a static dream as the car actually drives. Keen to see what the future may be like in just 15 years time, Auto Express was invited to a secret military base in France to go for a spin.

You’ll have noticed by now that the car looks a little bizarre. While most concepts are perfectly proportioned, the X E-Tense is asymmetrical. “We designed it like this because we wanted to emphasis the dual purpose nature,” DS’s design director, Thierry Metroz, tells us. “The X E-Tense is all-electric and it’s fully-autonomous too, but we think people will still want to drive.” 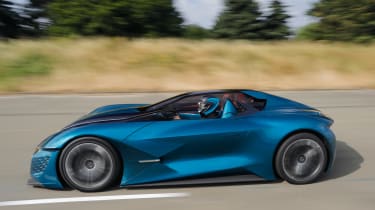 So, one half of the car is designed to be driven with a conventional steering wheel and pedals, but the other is a separate cocoon where you sit, maybe with a passenger thanks to a little fold-out seat, when you want to be driven. In the cocoon there’s an armchair-like seat trimmed in red leather and feathers, a coffee machine, a high-end Focal sound system, a B.R.M clock and a glass floor to see the road underneath. “I see autonomous driving as a way of letting us switch off and take pleasure from travelling, not as a chance to work on the move,” smiles Metroz.

The styling may look slightly absurd in images, but in the metal it seems to work. Metroz tells us the idea was to make the X E-Tense look a little like a motorcycle and side-car, and while it is forward-looking, in true concept car style there are a few features that will feature on future DS models.

The studded grille is set to appear on the next but one DS – likely to be the new DS 4 hatchback – and future models will have less chrome trim. “Chrome is over,” proclaims Metroz. “The DS 7 will be one of the last to have so much chrome. It’s not as premium-looking as it used to be, that’s why the X E-Tense just has little chrome wings on the grille.”

Along with the grille the X E-Tense’s headlight design will appear on future DSs too, likely to be within the next five years. Metroz calls it a ‘light veil’ and it’s made up of 1,500 LEDs spread over the lower part of the car. Day-running lights and indicators wash over the surface while at the bumper’s leading edge, five ultra bright LEDs act as the headlights. At the rear there’s a similar arrangement but those ‘veils’ also display the different energy-recovery phases.

As it’s a glimpse into the future, there’s no supercharged V8 under the bodywork but an all-electric powertrain. In fact, it’s not just any normal powertrain but one pinched from this year’s DS Virgin Racing’s Formula E car, mounted in a bespoke, carbon fibre chassis and tweaked by DS Performance – the sporting arm of DS Automobiles.

DS claims the batteries and motors can spool up 540bhp in road use and 1,360 on the track. But the reality is on the day we tested the car, it had the same power output of the Formula E racer, so around 200bhp. 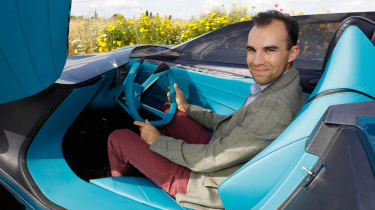 We’re not allowed to get behind the wheel but instead take to the passenger seat. There’s little time to get comfortable in the seat and pour a coffee though as the driver – unrecognisable thanks to a helmet that mimics the front of the car – takes full advantage of a closed-off runway and attacks a series of slaloms. Road holding is excellent with just a whiff of understeer and body roll, but the overriding sensation is speed.

Thanks to that Formula E powertrain, the X E-Tense is lightening fast off the mark, and the glass floor enhances the gut-wrenching acceleration. The sight of the road rushing between your feet emphasises the speed but also it’s the noise – it sounds part Star Wars, part Second World War air-raid siren.

We can return to this article in 15 years time and either sagely nod our heads at Metroz and his team’s foresight at motoring in the year 2035, or laugh at the ambitious absurdity of it all. Either way the DS X E-Tense is an interesting, smile-inducing car that, more than anything, adds a little fire to the fledgling DS Automobiles brand.