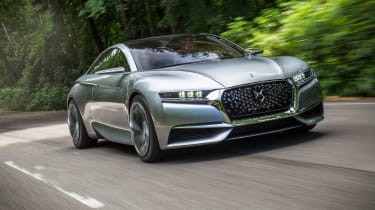 While we can’t really tell you too much about how the Divine by DS is to drive, it’s a fascinating look at the future of the DS brand. Design will play a huge part in whether the fledgling luxury brand sinks or swims, but if it wants to succeed it’ll need to hit its German rivals where it hurts, from behind the wheel.

The Divine DS first appeared at the Paris Motor Show in 2014 and bosses stressed from the outset that such a model would never make production. However, they did confirm that aspects of the design will make their way onto new DS models in the not-too-distant future. Almost 10 months later – and just weeks after the Divine was showcased on DS’s stand at Goodwood – Auto Express has been given the chance to drive it.

The first thing you notice is how small it is. Forget the show pictures, this is a beautifully-proportioned Ford Focus rival whose footprint resembles more DS 3 than DS 4. However, open up the lavish scissor doors and you reveal an interior like no other. There’s an aeroplane style squared-off steering wheel and classy heads-up display, while the sharp diamond shapes and intricate buttons for the gearbox dominate the centre console. The sweeping leather dash is another interesting feature, and it continues through the car past the front seats and into the rear. 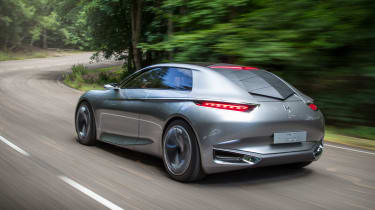 The back is accessible via a pair of rear-hinged doors, allowing the compact exterior dimensions to hide a relatively practical interior. Of course, being a concept car there’s no air-conditioning or climate control, and the full-length glass roof turns it into a greenhouse on a hot day.    Outside, there are hints of Jaguar XE at the front, and Porsche 911 at the rear. The chrome flashes give a premium look, while the intricate lights and floating A-pillars are fascinatingly detailed. The scaled panels replace the rear window, with a camera at the top for improved visibility when parking. Under the bonnet is PSA’s 267bhp turbocharged four-cylinder petrol engine from the Peugeot RCZ R. In theory, that should make it capable of 0-62mph in around six seconds, with a top speed of 155mph. However, in reality, the Divine is still very much a concept car, with speed limited to 30mph – even within the confines of our test track. 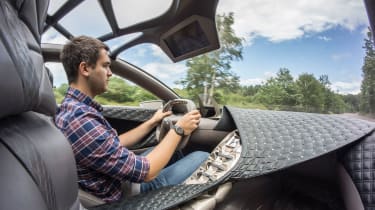 It also makes use of DS’s EAT6 automatic gearbox, with steering wheel mounted paddles. Our version required inputs on the upshift, but changed down itself as you softly applied the brakes. There was a notable whoosh from the turbo as you lifted off the accelerator, but we were never going fast enough to offer much idea of what it’s like to drive at speed. While it is impossible to gain any real driving impressions from a multi-million pound experiment such as this, it’s gave us an opportunity to quiz designer, Damien Fressard, about what we can expect from DS in the next few years. “This is a showcase of ideas and new things. It’s not necessarily a production car but what it does give is a feeling of the detail and the luxury of future models. 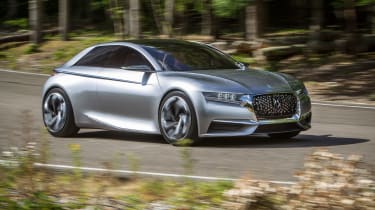 “What we are going to see is ‘interchangability’ of the interior. For example you will be able to change the inside of the doors and the dashboard. We’re not talking about small details – but major things inside the car.” We asked Fressard if that meant colours, materials or both, and he insisted DS would rival the likes of MINI and Fiat for personalisation in the years to come. 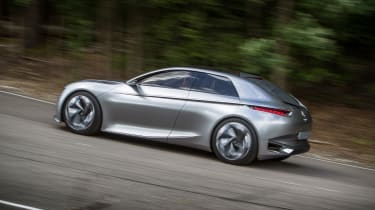 “Perhaps metals are a bit cold to the eye, but expect lots of leather and interchangeable colours in the future.”  In terms of exterior influences, it is Fressard’s use of diamond shapes that we’ll throughout next-generation DS models. Taking inspiration from the DS logo, the sharp edges have been executed all over the Divine’s sculpted body – and will appear on the six new DS cars due by 2020 – including more than one SUV.