The breathtakingly-fast Elemental RP1 was built for the track, but it feels just as at home on the road 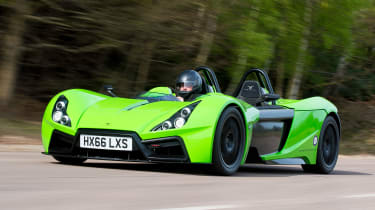 The RP1 is a brilliant track day weapon that will be as usable on the road as a Caterham once the new one-piece windscreen has been developed. Elemental’s offering is expensive, yes, but it’s worth every penny for the thrills it so richly provides.

Track day cars simply don't come much more focused – or faster – than the incredible new Elemental RP1. Yet once this car’s windscreen has been fitted (which is already finished but not photographed on the car you see here) it will be as easy to live with on the road as a Caterham Seven. It even has a 50-litre boot.

Designed and engineered by an eclectic team of ex-Ford and ex-McLaren employees, the RP1 has a carbon-composite chassis tub at its core and a turbocharged 2.0-litre Ford Ecoboost engine in its tail. 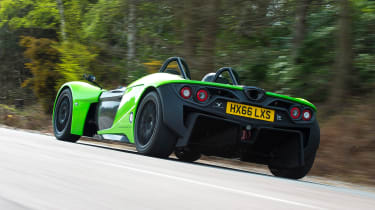 Its suspension is double wishbones all round with a sequential six-speed gearbox by Hewland integrated into the rear suspension, just like they do on Formula One cars.

It weighs but a whisker more than 600kg, and that’s with all its fluids and half a tank of petrol in place. And that allows its 320bhp engine to give it a power-to-weight ratio of over 500bhp per tonne.

In reality, however, it’s the torque of the RP1 that matters most, and which delivers the biggest surprises – because when you have 450Nm available from below 2000rpm and there is just 630kg to propel, the results are always going to be spectacular. 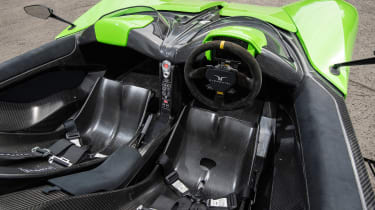 On the move the RP1 feels pure single-seater but with two seats, not one. You sit with your feet up at eye level, bum right down in the beautifully finished carbon-fibre seat. To get going you need to use the clutch, but once you’re rolling no clutch whatsoever is needed. Instead you flick the paddles and, thunk, the gears go in, lightning-fast and super-clean, up or down.

There are five different drive modes to choose from; road 1, road 2, track, race 1 and race 2. In road 1 the RP1 feels insanely rapid, with massive acceleration available from the moment you so much as breathe on the accelerator. But with plenty of traction control intervention to keep you out of the undergrowth.

In road 2 you get a bit more boost, a bit less traction control. And so it goes on, all the way up to race 2, in which the RP1 feels completely unhinged, with a lot more boost, almost no traction assistance at all and a level of acceleration that will make you physically uncomfortable to begin with. 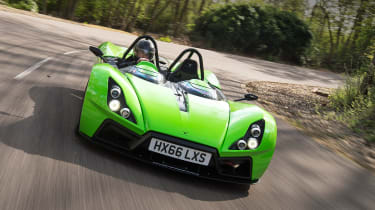 After a while, though, you get used to it and inevitably want more. And after a little while longer behind its steering wheel you realise that the RP1 actually has the chassis, the brakes, the steering and the grip to match its astonishing straight-line performance. Even when it’s sliding, the RP1 still feels beautifully balanced, with no sharp edges to its handling and massive amounts of grip and composure. Everywhere.

Be in no doubt, the RP1 is a landmark car of its ilk. So although it’s phenomenally expensive at £90,900 plus local VAT, it is worth every penny, and then some.