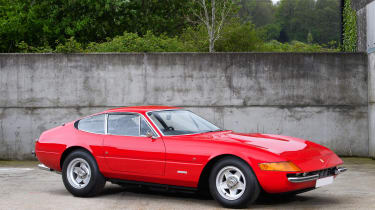 This classic 70s Ferrari, delivered new on the 3rd August 1972, is one of only 158 genuine right-hand drive models ever built and in its day, it held the crown as the world’s fastest road car. If you were thinking it could have been the inspiration for Elton John’s 1972 hit single Rocketman, though, you’d be mistaken.

The pop legend is said to have purchased the Daytona with the proceeds of the Goodbye Yellow Brick Road album in 1973, keeping it until 1975. For the last 16 years it’s been in the hands of a private collector.

Sure to be a big selling point is the current condition of the 365 GTB/4 with unblemished bodywork and a well-preserved interior including many extra features that did not originally come as standard, - including factory fitted air conditioning.  It’s finished in the classic Ferrari Rosso Chiaro paint scheme and boasts a black interior in line with the manufacturer’s original specifications.

The Daytona’s 352bhp V12 engine is capable of firing it to 175mph, a remarkable figure considering the car’s age. There’s a 5-speed gearbox and Ferrari-fitted servo assisted brakes.

Saturday night will be alright for fighting when the car goes under the hammer at the Silverstone Classic Sale and plenty of Ferrari collectors from around the world wont want to let the sun go down on this vehicle without making a serious bid to own it. With a £500,000+ price tag on the cards, however, it won’t be a moment for an indiscreet scratch of the nose. After all, sorry seems to be the hardest word.

Tells us what you think of the ex-Elton John Ferrari Daytona in the comments section below...