The car won Schumacher's fourth championship and was sold as a contemporary art piece, beating pre-auction estimates by over £2 million 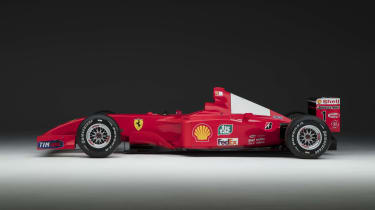 Michael Schumacher’s title-winning Ferrari F2001 has been auctioned as a piece of contemporary art for $7,504,000 (£5.7 million). RM Sotheby’s Contemporary Art Evening Auction in New York sold the F2001, which was initially expected to fetch around £3 million.

The F2001 carried the seven-time Formula One world champion to his fourth drivers’ title and his second with Ferrari. The Italian marque also took its 11th constructors championship with the F2001. The chassis being auctioned, number 211, was the very car that Schumacher won the prestigious Monaco Grand Prix in, which was one of Ferrari’s nine victories in the 2001 campaign.

At the time, the F2001 and Schumacher set the record of most points in a season with 123 points. The German finished all bar three of the 17 races in the 2001 calendar on the podium.

The car was bought not for its performance but rather the heritage that it possesses. Both Ferrari and Michael Schumacher are names synonymous with Formula One, as is the Monaco Grand Prix, the most prestigious event on the F1 calendar. Marry the three together with the iconic bright red silhouette draped on 90’s and 00’s Ferrari F1 cars, and you’ve got a contemporary art piece with plenty of pedigree.

The F2001 was expected to fetch over $4 million (£3 million) when it went under the hammer. After a six-minute bidding war, the iconic F1 car sold for £2.7 million more than expected. It is still driveable and it is also eligible for historic motor racing.