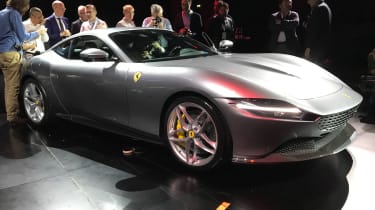 Ferrari has taken the wraps off a totally new model called Roma, which is the firm’s fifth new car to be revealed this year. The Ferrari Roma slots into the line-up as a new V8 powered, fixed roof Berlinetta - a front-engined coupe sitting below the mid-engined F8 Tributo, but above the drop-top Portofino.

Described by Ferrari marketing and commercial boss Enrico Galliera as an “elegant and futuristic” grand tourer with an optional 2+2 seating configuration, or a shelf for luggage behind driver and passenger, it looks quite unlike anything else in the Ferrari range.

The Roma is defined by styling inspired by 50s and 60s Italian car design. Specifically, Ferrari has looked to the 250 GT Berlinetta Lusso and the 250 GT 2+2. 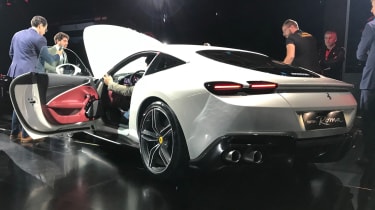 The overall shape emphasises a long bonnet, a low nose, a new look grille, new LED matrix headlights with ultra-thin daytime running LEDs and a set back cabin with strong rear shoulders over the rear axle. A hidden rear wing is integrated into the bottom lip of the windscreen. This active aerodynamic element is capable of taking up three different positions, depending on how much downforce the driver requires.

At the other end, the nose is defined by a totally new, minimalist, grille concept, described by chief designer Flavio Manzoni as a “sharknose.”

“We wanted to create a car that was quintessentially GT, but we don’t like the overly nostalgic approach,” he explained.

“We had to create something pure and sophisticated. Something that can be drawn with a simple line from a pencil.”

It benefits from new modular chassis and platform technology developed by Ferrari, set to underpin all of the marque’s next-generation models. 70 per cent of the Roma’s components are totally new, while with fluids on board it tips the scales at 1,570kg.

Power is provided by a turbocharged 3.9-litre V8 developing 612bhp and peak torque of 760Nm between 3,000 and 5,750rpm, while the redline is capped at 7,500rpm. Drive is sent to the rear axle by the same eight-speed dual-clutch automatic gearbox used in the new plug-in hybrid SF90 Stradale supercar, recently introduced as a new range topper for the marque. Ferrari claims 0-62mph in 3.4 seconds, with top speed touted as in excess of 200mph. 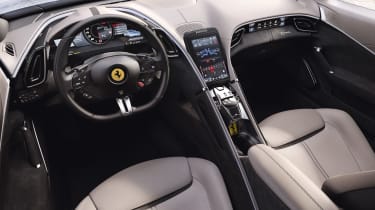 It features a wholly new interior architecture based around two separate cocoons for driver and passenger. The dashboard is defined by a new portrait central infotainment screen 8.4-inches in size that flows directly into the gear selector panel, beyond which the centre console continues down into the floor of the car. The steering wheel is taken from the SF90, as is the 16-inch fully digitalised instrument panel, while as ever a secondary display is placed opposite the front passenger.

First UK buyers will get their cars next summer, while prices should start from around £190,000.

Do you like the look of the new Ferrari Roma? Let us know your thoughts below...