We drive the new 710bhp Ferrari 488 Pista Spider, and find that it’s an incredible machine 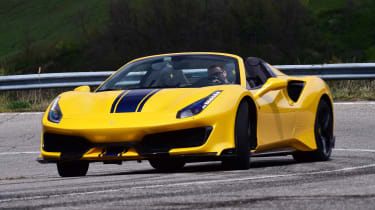 With a base like Ferrari’s 488 Pista to start from, the Spider had all the elements to make a mind-bending machine. Ferrari has realised that potential with a sublime chassis that’s elevated to an incredible level thanks to its ultra-sophisticated electronics. It gives just a fraction away to the coupe in composure, but there’s more than enough personality and pageantry from the Spider without really affecting performance. Convertible supercars don’t come much more capable than this.

The Ferrari 488 Pista Spider is a swansong for the brand's 488 supercar. This 50th and most powerful series production convertible Ferrari ever marks the last in the line for the 488, as its replacement – the F8 Tributo – will arrive later in 2019. But as last hurrahs go, this is a triumphant one.

Let’s start with the numbers. This drop-top mid-engined model boasts 710bhp and 770Nm of torque from its 3.9-litre twin-turbocharged V8, which means 0-62mph in 2.85 seconds and a top speed of 212mph. The engine has been carried over from the Pista coupe wholesale, but that’s no bad thing because it’s so strong.

Like the coupe, the Pista Spider gets new turbos, lightweight titanium connecting rods, a lightened crankshaft and flywheel, hollow inlet valves and an Inconel exhaust among other features, which together save 18kg and give it a freer revving feel compared to the GTB’s engine. Internal friction has also been reduced. Combined with carbon body panels and other components, the weight saving over a 488 GTB Spider stands at 40kg. Though it’s still 100kg heavier than the Pista coupe. 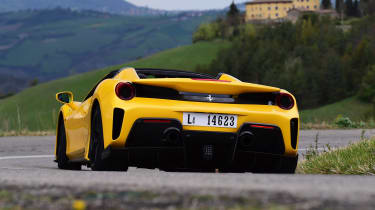 The track-focused drop-top (Pista literally translates as ‘Track’ incidentally) also inherits Ferrari’s Dynamic Enhancer (FDE) from the Pista coupe, which is another huge positive. This tech is part of Ferrari’s Side Slip Control 6 chassis system, which integrates the e-diff, SCM-E adjustable dampers and the F1-Trac ESC.

Unsurprisingly, aero improvements from the fixed-roof Pista have been adopted too, and it’s more comprehensive than you might think. The intakes have been moved from the sides on the GTB Spider to the rear deck, to make way for larger turbo intercoolers, the radiators in the nose are now canted back rather than forwards and there’s an F1-inspired S-Duct that sits between them to channel air over the car and boost downforce.

Lower the roof (electronically in 14 seconds at speeds of up to 30mph) and of course the Pista Spider generates more drag, but that’s where the myriad tweaks to the underbody and the active aero, also help to boost stability. Our twisty drive meant we didn’t get to explore the extra high-speed stability too much, but it did allow us to revel in the convertible car’s extra charm. 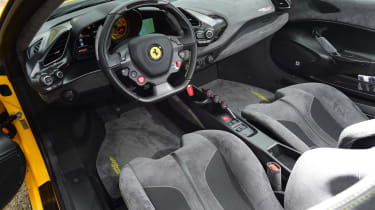 On bad roads, with the roof down, you sometimes feel a small shimmy and a little shake through the chassis, but the reduction in structural rigidity in the Pista Spider isn’t immediately obvious. You have to build up the level you push the car to in order to find this out, and in the process there’s so much to enjoy.

The lighter, thinner Inconel exhaust is a little droney (let’s face it, it’s never going to rival a 458 Speciale for noise) but there’s more tone to the note and it crescendos to a fast-paced staccato ‘brap’ as the engine canons into its 8,000rpm rev limiter. With the roof down you also get an amplified soundtrack from those turbos as they hiss and chuff, building and dumping boost in sync with your right foot.

So there is some theatre, then – a necessary part of any open-top Ferrari – but there’s genuine substance to back this up thanks to the technological advances above.

The steering is as sharp and as fast as we’ve come to expect from Ferrari; incisive, direct and with a little more weight than a standard Spider thanks to the wider, stickier Michelin Cup 2 tyres developed specially for the car.

You get used to how quickly the nose hunts out apexes, while there’s huge grip to wring from those tyres – and thanks to the FDE the package gives you immense confidence to throw around a £250,000-plus 710bhp mid-engined supercar like you almost have no right to.

It comes alive in CT-Off mode. FDE translates the conversation going on between numerous different ECUs into the same language, and reacts to your inputs in milliseconds. It also has the ability to act on the brake calipers independently, to better balance the car on and over the limit. It’s intervention is more subtle, but more effective. 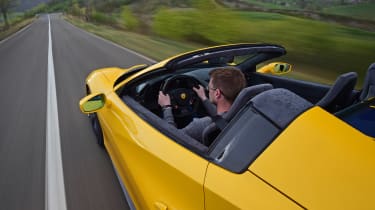 What it means is you can exit almost any second, third and sometimes fourth gear corners with an armful of lock safe in the knowledge the car has your back. If it senses you’re in control it’ll let you have some more power and more angle, if it thinks you’re not, then it’ll rein things in. It’s flattering and engaging, which is a fine line Ferrari treads very well.

This is not the be-all and end-all of driving a supercar, but what it does mean is more people can explore more of the car’s performance, which is undoubtedly a good thing. Ferrari talks a lot about emotion and how to measure driving fun: put someone in a Pista Spider for 20 minutes and then watch their smile as they step out. That’s the metric Ferrari should be measuring. With the added element of having the roof down – if it’s your thing, it’s a big buzz.

There’s little turbulence with the roof open (evidence of that clever aero again), and with it up, the Spider is refined. You hear stones pinging off the underside of the body, but you could cover serious distance in it without trouble – just make sure the softer bumpy road mode for the suspension is selected as it lets the car flow more freely over ground and doesn’t restrict the chassis so much in its vertical movement. It’s a nicer machine for the road configured like this.

On the subject of usability, there’s a 170-litre front boot enough for two bags and a 78-litre fuel tank that’ll give a decent range if you’re conservative with the throttle.