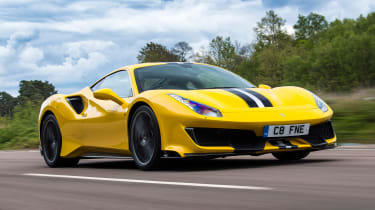 The glory of the Ferrari 488 Pista is not the fact that it is even more incredible to drive on a track than the regular 488. It’s that this sharper focus at the top of the performance window has not come through any sacrifice of usability at lower speeds. It’s pure folly, of course, but also one of the most complete supercars that we’ve ever driven.

Ferrari has a strong record when it comes to delivering ‘special’ versions of its (frankly already special) mid-engined cars. And while the likes of the 458 Speciale and 430 Scuderia had extra focus on the track, they always managed to be just about usable on the road as well. We felt the same had been achieved with the latest offering, the 488 Pista, when we tried it in Italy last summer – but now we’ve had a chance to see if this still holds true on British roads.

To recap, the 488 Pista gets several choice components from Ferrari’s 488 Challenge and GTE racers, including some delicious engine enhancements, such as lightweight titanium connecting rods for the pistons, carbon-fibre intakes and uprated twin-scroll turbochargers.

The end result is a 3.9-litre twin-turbo V8 that now produces 710bhp and 770Nm of torque – and this in a car which, thanks to a lighter exhaust and more extensive use of carbon fibre (including the bonnet, a work of art on its own), weighs just 1,385kg. That’s 90kg less than the conventional 488 – a vehicle that could hardly be called heavy. 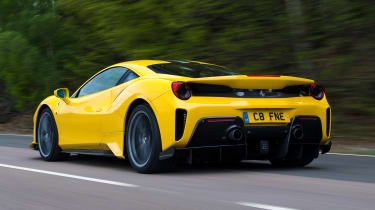 The Pista’s figures sound potent, then, and they are; the 0-62mph dash now takes a ludicrous 2.85 seconds, and the top speed is in excess of 211mph.

As we discovered last summer, the Pista has plenty of trick technology that makes it an exhilarating hoot on a closed circuit. Chief among these is the Ferrari Dynamic Enhancer, which mixes Slip Slide Control with the braking system for an even more controllable slide.

It’s definitely best to get acclimatised to the system on a track, we’d say, if only because the more extreme modes allow you quite a bit of slip before they ultimately scoop you up and save you from trouble.

And believe us when we say it would be trouble with a capital T, because the Pista’s performance is simply epic. The system varies the amount of torque available in each gear, but instead of feeling like a limitation, this only serves to lengthen the wave of acceleration. You’ll be pretty much into three figures by the time the steering wheel lights up to tell you to shift up from second gear – and then third, fourth and fifth seem to deliver no less of a punch.

The revised exhaust system snarls away behind you, but this, perhaps, is the only area where the Pista can’t quite match its direct predecessor, the 458 Speciale. That car had the advantage of a shrill, normally aspirated V8 engine, and we reckon it sounded a teeny bit purer as a result. 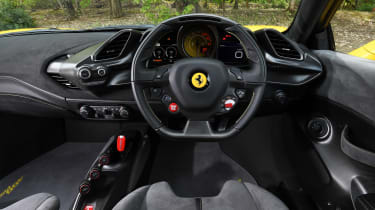 Astonishingly, though, the Pista doesn’t really lose out on usability. You could drive this car to within an inch of your life (it’d still have plenty in reserve, we’d wager) on a race track, and then pootle home with the gearbox in auto and the car’s dampers in their most tolerant setting.

You wouldn’t be uncomfortable, such is the sophistication of the ride, and perhaps your only significant challenges would be parking in tight spaces and, yes, resisting the urge to squeeze the throttle that extra half-inch that could take you well beyond the speed limit. Self-restraint is down to you, after all – not Ferrari.

Inside, there’s plenty of proof that you’ve paid extra cash for fewer embellishments. There’s no infotainment fitted – but you do at least get dual-zone air-conditioning – and even the glovebox disappears, to be replaced by door pockets. The cabin’s a fabulous, focused halfway house between a race car and a road machine – much like the 488 Pista as a whole, in fact.