With a £2.5million price tag and a unique carbon fibre body, it’s the ultimate Ferrari! 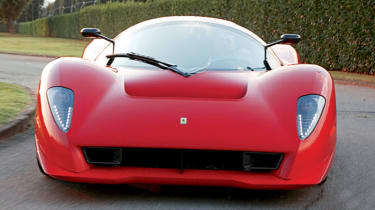 What an amazing machine! In the Thirties, Pininfarina was created to produce sensational one-off models for super-rich owners. The company has grown dramatically since, but it has never stopped building dream cars – and the P4/5 is exactly that. It looks stunning, has some of the finest craftsmanship and attention to detail ever seen on a road car and all for a stratospheric price. We only hope its owner is pleased with the results!

It’s the ultimate Ferrari! With a unique carbon fibre body designed by the world’s most famous styling house and a £2.5million price tag, this machine truly is a supercar – and what’s more, Auto Express has been granted exclusive access.

Called the 612 P4/5, the amazing creation mixes the artistic talents of legendary Italian design firm Pininfarina with the searing performance of the Ferrari Enzo. The stunning car will be officially unveiled to the public later this month at the famous Pebble Beach Concours d’Elegance event in California.

A year and a half in the making, the project is the dream of super-rich US movie mogul and Ferrari enthusiast James Glickenhaus. He took his Enzo to Pininfarina requesting a completely new body inspired by the P4 racing cars which competed in the Le Mans 24 Hours back in the Sixties.

As we revealed in our scoop story in Issue 902, the car was designed by Pininfarina stylist Ken Okuyama and his team – who also penned the Maserati Birdcage 75th Anniversary Concept and Ferrari’s new 599GTB. The P4/5 is a complete contrast to the sharply styled, Formula One-inspired Enzo on which it’s based. It has more than 200 completely new body parts, including a whole host of luscious curves, from the front wings to the tail.

But the most amazing feature of the P4/5 is the clear glass canopy. It extends from the windscreen over the roof and engine, all the way to the rear, and incorporates a pair of gullwing doors. At the front, the Enzo’s twin radiators have been replaced by a single unit to allow a shorter nose more in keeping with the P4 of the Sixties. In contrast, the LED headlamps and tail-lights, intricate 20-inch alloys and complex reprofiled venturi tunnels which help to provide downforce are bang up-to-date.

Mind you, that’s not to say all the details are easy on the eye. The white ceramic exhaust pipes which emerge from the rear deck may be authentic to the original P4 racer, but here they simply look like the kind of thing you’d see on an American truck.

Inside, the two racing seats feature unique fabrics and are designed specifically to fit owner Glickenhaus and his son, while the dashboard has been simplified with a digital display. Luxuries include a phone system that works anywhere in the world and a bespoke iPod dock on the centre console. In the fullness of time, the facia will also include passenger-operated sat-nav and a rally-style timing system.

The steering wheel features the same paddleshifters as the Enzo on which the P4/5 is based, and they’re connected to an identical six-speed gearbox. Power comes from the same 660bhp 6.0-litre V12, too, but thanks to that glass roof and new bodywork, weight has fallen by 55kg to 1,310kg.

Combined with wind tunnel-tested aerodynamics, that means the P4/5 has a potential top speed of 225mph, up from the Enzo’s 217mph. A wider track front and rear offer even higher cornering speeds, too. It should ensure an incredible response when the 612 P4/5 gets its official public launch at Pebble Beach on 20 August.

And if you want to see the car but can’t quite justify a flight to the US, the P4/5 is also set to appear a little closer to the UK, making an appearance at the Paris Motor Show in September.