The best gets better for Ferrari Ultimate 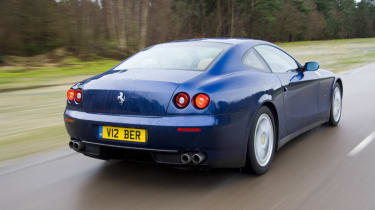 Any modern Ferrari is an exceptional machine to drive, but the HGT-S package makes the already stunning 612 an even more attractive proposition. At £183,145, this car is far from cheap. But it’s a full four-seater, is amazingly docile at low speeds plus is extremely nimble and entertaining for its size round corners. In addition, everything is accompanied by the most incredible noise.

For some people, good is not enough. No matter how accomplished a new product is, it still won’t meet their exacting standards. They are the kind who spend a small fortune on a house, then fork out a similar amount having it gutted and refitted to their taste.

And for people such as this, even a Ferrari in standard trim won’t suffice. So, to try to satisfy their demanding tastes, the Italian firm has come up with the 612 Scaglietti HGT-S. The 612 might be the marque’s most practical model, but it’s also the world’s fastest four-seater. Yet by spending £7,420 – or the cost of a basic supermini – you can turn it into something even more distinguished.

Visually, changes are kept to a minimum. The front 18-inch wheels are replaced by 19-inch alloys to match the rears, while racy yellow brake calipers lurk behind them. It’s clear big wings and crazy paintjobs are not really the preserve of Ferrari GTs.

Therefore, this extra-special 612 has to seduce you in different ways – and the parts of the HGT-S pack which you can’t see are every bit as effective as any cosmetic enhancement. There’s a new sports exhaust, while a steering wheel-mounted button lets you stiffen the suspension. New software for the semi-automatic gearbox makes shift times even quicker. The first of these modifications to make itself apparent is the exhaust. People talk about cars having a soundtrack, but the variety of noises the 612 is capable of makes other machines appear almost one-dimensional. The V12 motor comes to life with a rasp, settling into a low burble at idle and seeming quite gruff the lower you are in the rev range. But strive for its upper reaches (the red line is 8,000rpm) and you will be treated to a proper scream.

The gearchange, too, makes other semi-automatics feel a bit lacking. In most cars, you get the impression that you could change ratio as quickly and as smoothly using a conventional stick and clutch. Not so the Ferrari. If you pull the right-hand steering wheel-mounted paddle, you will get crisp 150-millisecond upshifts. The left-hand paddle changes down with an equally satisfying blip of the throttle, making you feel like you’re in a Formula One car. On first impressions, the 612 is a big machine. But as the speed builds, you would never know that you were driving something that’s as long as a Mercedes R-Class.

Aluminium has been used throughout the chassis and bodywork, and the result is a surprisingly nimble car. Of course, there is traction control – there’s even launch control if you can afford the hammering the clutch takes – but it’s not too invasive, letting the back of the 612 swing gratifyingly wide if you’re too lively with the throttle.

The HGT-S package isn’t reflected inside, as the H stands for handling. But the largely standard interior was better put together than we had expected. Apparently, it’s an area Ferrari has been working hard to perfect. The Day-tona seats were also supremely comfortable – as they should be for the extra £1,985. And the driving position is brilliant, even letting those with long legs get close to the steering wheel.

The 612 Scaglietti is a pretty special machine all round. And anyone who stumps up the additional cash for the HGT-S pack will not be disappointed with the improvements.

For an in-depth buyer's guide on the Ferrari 612 Scaglietti HGT-S from Classic and Performance Car click here...