This is the production version of the uber exclusive Ferrari Sergio. One lucky chap in the UAE has got his hands on the very first model with all of the other five versions already spoken for. Prices haven’t been revealed but are estimated to lie around €2.5 million a pop.

Based around the mechanics of a Ferrari 458 Spider, the Sergio was previewed by a concept seen at the 2013 Geneva Motor Show. Slight visual tweaks have had to be made in order to make the car road legal but the production version preserves its open top cabin, transparent boomerang headlights and two-tone exterior colour theme.

The most noticeable changes for the road-going car compared to the original concept are the addition of a windscreen, door mirrors and indicators from a standard 458. Fully functioning circular rear lamp clusters as well as a road legal exhaust system have also been added. 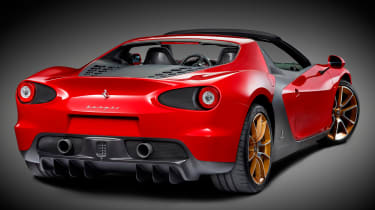 Being based on the 458, the Sergio also shares the 597bhp 4.5-litre naturally aspirated V8 engine, powerful enough to get from 0-62mph in 3.0 seconds. The example delivered to the owner in Abu Dhabi featured contrasting red stitching in the cabin as well as Alcantara inserts on the seats and carbon fibre on the doors.

Now read about the other new Ferrari unveiled this week, the amazing LaFerrari FXX K.