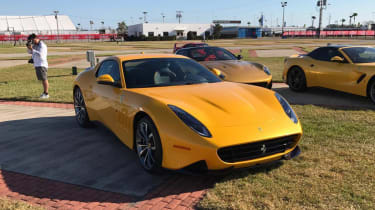 A mysterious one-off Ferrari has appeared over the weekend at the Ferrari Finali Mondiali event in Daytona, Florida, said to be called the SP275 RW Competizione.

Ferrari has said nothing official about the car, but it’s clear that the SP275 is a Special Projects model, created as a custom Ferrari for a very special customer.

Ferrari has a history of creating these models. Earlier this year it revealed the 458 MM Speciale – a unique version of its most hardcore 458 with bespoke styling details, build for an unidentified British owner.

Other recent one offs include the F12 TRS and the Ferrari SP America – both based on the firm’s flagship grand tourer, the F12 Berlinetta.

Like those two cars, the SP275 RW Competizione appears to be based on the F12. That would mean at least a 730bhp naturally-aspirated 6.3-litre V12 lurks beneath the yellow bonnet.

However, some the vents and louvers positioned around the car’s bodywork suggest the SP275 could have began life as the F12 Berlinetta’s hardcore brother – the F12tdf.

That car uses the same 6.3-litre V12 engine, but with power pushed up to 769bhp. It means the F12tdf is capable of 0-62mph in 2.9 seconds and a top speed in excess of 211mph, while its brakes are poached from the LaFerrari. Only 799 units are planned with every one already sold out, so this means the SP275 would be a one-off version of what is already a limited edition Ferrari.

As there’s no official information, there’s no price tag, but expect this one-off model to have cost considerably more than the £340,000 price of a new F12tdf.

What would your one-off dream Ferrari be like? Let it all out in the comments.