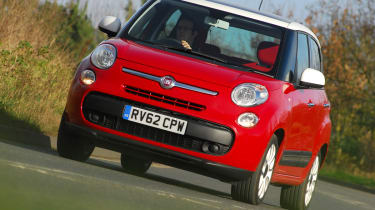 It would be unreasonable to expect the Fiat 500L to handle like a sports car, but there is more body roll than you get in a Ford B-MAX, and the bigger and heavier Fiat can’t hide its MPV nature.

The steering is light, as are the pedals and gearshift. While it's easy to drive, none of the controls have much feel and it's pretty vague most of the time. The brakes are also overly sharp. However, if you accept the 500L doesn't have a sporty nature, and that it's just a decent and safe-handling MPV, you won't be disappointed.

The raised seating position and light controls make it a breeze around town too. Plus, aside from some fidgeting at low speed, the soft suspension set-up delivers a decent ride. Road noise isn’t too much of an issue on the motorway, either.

The Trekking model is interesting, as it comes with higher suspension, special mud-friendly tyres and a traction control system optimised for dirt tracks or icy conditions. It’s not a substitute for full 4x4 traction, but worth a look if you live somewhere rural. 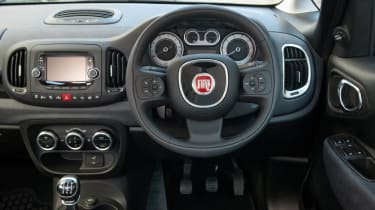 The 1.4 litre T-Jet petrol engine may be the quickest in the 500L’s arsenal, but it’s still not going to set your hair on fire. 0-62mph comes up in a reasonably lively 10.2 seconds if you pick the 118bhp version, although the same unit is available with a lesser 94bhp and a 12.8s 0-62mph time.

The more efficient petrol TwinAir (two cylinder) model has 104bhp, and does 0-62mph in 12.3 seconds. All the petrol engines come with a six-speed manual gearbox.

We prefer the mid-range grunt of the 118bhp 1.6-litre diesel to the fastest petrol though. It’s a shade slower to 62mph at 10.7 seconds, but the extra pulling power makes a difference to the driveability – especially when you’re fully loaded. That’s because the biggest diesel’s 320Nm torque figure is significantly higher than the petrol’s 215Nm.