We drive Fiat's no-frills MPV to find out if the boxy newcomer can cut it here in the UK. 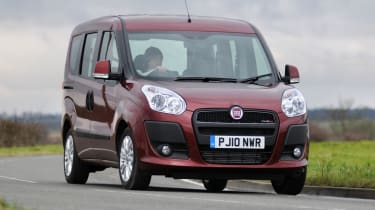 The styling may still be divisive and the driving experience still a bit wide of the mark but you can't argue with the Doblo's practicality and value for money. There's no cheaper way to carry seven people, so if you're prepared to put the lack of refinement aside, the big Fiat begins to make a real case for itself.

Half van, half people carrier… Fiat’s boxy Doblo offers huge amounts of space and practicality but has always struggled to shake off its industrial styling.

This facelifted model has been given a makeover in an attempt to do just that, but it still falls some way behind rivals in the style stakes. The nose is sleeker and the 16-inch alloy wheels and foglights on our Elegenza model add a sporty touch but there’s no escaping the high-sided, boxy van profile.

The pay-off is a hugely spacious interior that boasts a class leading 790-litres of boot space and the £700 option of turning the Doblo from a five-seater into a seven-seater. For big families the Doblo is ideal, with all seats benefiting from a large amount of leg and headroom.

The interior is well laid out and logical but early signs suggest there could be problems with build quality. After only a couple of days with our test car, the glove box wasn’t closing properly.

Under the bonnet is a 1.6-litre MultiJet diesel engine, which delivers 105bhp and 290Nm of torque. Fitted to such a large car, the unit can struggle and needs to be worked hard if you’re in a hurry.  That’s reflected in the performance figures too, with the Doblo taking 13.4 seconds to accelerate from 0-60mph.

Refinement is also an issue, and the diesel is noisy on start-up and becomes intrusive when the revs rise over 2500rpm.

On the upside, the Doblo boasts impressive economy of 54.3mpg and CO2 emissions of 138g/km.

There are no complaints about the ride comfort either. The soft springs soak up even the worst road imperfections but suffer in the corners. Throw the Fiat into a tight bend and there’s plenty of grip but the body rolls significantly.

In the past, Fiat’s MPV has always been praised for its bargain price-tag and this model is no different… if you opt for the right spec. The car we tested is a top of the range Eleganza model that offers good value for money at £16,785.

While that figure isn’t especially low, the most basic 1.4-litre petrol model in Active trim costs just £12,370. It isn’t fitted with air-conditioning or electric rear-windows but considering the space on offer, you’ll struggle to find anything cheaper.