There's no such thing as a glamorous van. They might be practical, versatile and frugal, but your average commercial vehicle lacks the visual appeal that family car buyers want. 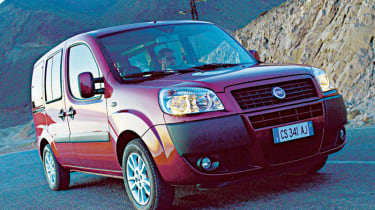 With smarter styling and an invigorated engine range, Fiat's Doblo has become a capable family car. There is no cheaper way to carry seven, and the cabin feels durable and well built. The only question mark is over image. If you can swallow your pride - and live with so-so refinement - it's hard to find better-value family transport.

There's no such thing as a glamorous van. They might be practical, versatile and frugal, but your average commercial vehicle lacks the visual appeal that family car buyers want.

In an attempt to make its Doblo easier on the eye, Fiat has given the slab-sided people carrier a facelift. But has it done enough to swap the van-man status for a more family friendly face?

The changes focus on the front end, where the previous pinched nose and black plastic overload have been rep-laced by a neater SUV-style-look - not unlike its Citroen Berlingo Multispace rival's. Smart lamps and body-coloured plastics give a classier feel, while alterations to the side mouldings and rear lights complete the makeover.

Inside, the dash design remains the same, but it is now made from two-tone plastics. Helping to banish the budget feel, there is no metal exposed on the door panels, and the electric window switches are easier to reach. There are still exposed screw-heads and hard trims, but the cabin is at least rattle-free. It offers masses of space, too, with the largest boot in its class. The unique Family model driven here is the UK's cheapest seven-seater, and will accommodate adults in every chair in comfort. Sliding doors add to the practicality.

The upright windows and angled steering wheel make for a commanding driving position, and visibility is superb. All engines are now Euro-IV compliant, and the diesel range - which takes 90 per cent of sales - has been expanded. The 105bhp 1.9-litre unit features Multijet injection, while there's a more powerful version with 120bhp. The 1.3-litre Multi-jet has also been reworked to produce 85bhp. Mean-while, a 77bhp 1.4-litre petrol motor replaces the old 1.2.

It's the smooth, free-revving and surprisingly swift 1.3-litre Multijet that impresses most. Both 1.9 units have an obvious diesel engine note, but all are more refined than you'd expect. Interestingly, all oil-burners share the same 200Nm torque figure, which can lead to wheelspin as the front wheels struggle for grip. Whichever machine you choose, a slick dash-mounted gearlever controls the five-speed box.

On the road, the Doblo is amazingly wieldy, with taut suspension and crisp, fast steering. Body roll is inevitable given its height, but it remains composed unless pushed too hard when cornering. The pay-off is a tight ride that can become bouncy at speed. Add to this excessive wind noise at motorway speeds, and refinement is poor. Prices for the revised line-up have yet to be announced, but insiders suggest there'll be a slight increase. Add around £200 across the range, and the base 1.2 will weigh in at around £9,295. Yet the pick of the range is undoubtedly the 1.3-litre Multijet Family, which will cost just under £10,800.