Has mild hybrid tech helped boost the Fiat Panda's appeal? We find out... 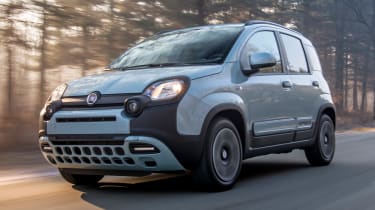 Fiat has launched new Mild Hybrid versions of its 500 and Panda city cars together as it takes action to cut emissions across its range. Both see their basic 1.2-litre engines replaced by an all-new electrified 1.0-litre unit that has been engineered with greater efficiency in mind.

The new engine is a naturally aspirated three-cylinder that’s paired with a 12-volt belt-integrated starter generator and an 11Ah battery. The former – essentially an uprated starter motor – is mounted directly to the engine and is used to provide a fast start/stop mechanism, as well as some light assistance under acceleration.

The mild hybrid system also allows for the complete shutdown of the petrol engine at low speeds. Engaging neutral at speeds below 18mph shuts off the engine, leaving the bigger battery to power the car’s systems. As on the 500, the system works well but feels a little alien at first, especially if you like to draw to a stop in first gear; making the most of the feature is a conscious effort on the part of the driver. 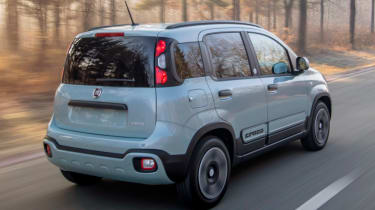 It’s important to note that the Panda Mild Hybrid is not capable of all-electric travel – as with the majority of mild hybrids, the car’s petrol engine is responsible for all propulsion, with only minor assistance coming from the electrical set-up.

The new powertrain replaces the 1.2-litre petrol engine on City Cross and Trussardi Pandas, and is introduced in this new Launch Edition model. There are no plans to replace the engine in the rest of the range, according to Fiat – but we reckon it may well happen in due course.

As with the 500 Hybrid it gets the same ‘Dew Green’ finish inside and out, plus seat fabric made from recycled plastic taken from the sea.

While it lacks the 500’s design appeal, the Panda counters this with far more in the way of practicality. The boot is bigger, there’s more space in the rear for passengers (although it’s still a tight squeeze) and there’s more space up front for the driver and front-seat passenger to get comfortable. The driving position is high and all-round visibility is predictably excellent – the Panda remains entirely at home in the city as a result. 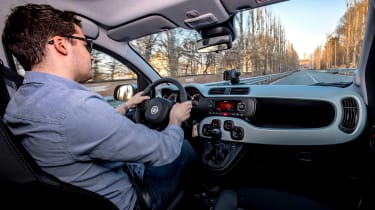 Where the Launch Edition 500 gets a snazzy infotainment screen and accompanying display in the instrument binnacle, the Panda makes do with a more utilitarian LCD radio and driver information screens. The included smartphone mount atop the dashboard allows for extra connectivity through Fiat’s Uconnect app.

The Panda is bigger and heavier than the 500, so while performance from the new drivetrain can be frustrating in the smaller car, it feels particularly lacklustre in the Panda. The lack of a turbocharger means that any meaningful acceleration requires plenty of revs, which in turn makes progress feel thrashy and laboured. The Panda’s cabin is better isolated from the racket, at least.

Where the Panda beats its 500 relative hands-down is on ride and comfort – there’s no crashing over big bumps, while good secondary ride means it feels more refined and settled at speed. It’s the one to go for if you plan to make longer journeys alongside your urban commutes.

Fiat’s early steps towards electrifying its range continue in earnest with the Panda Mild Hybrid. Utilising the same all-new drivetrain as found in its 500 Mild Hybrid relative, the Panda achieves similar claimed improvements in efficiency but is cheaper, rides better and is far more practical. The Panda feels very slow out of town, however, while quality still trails that of rivals.