Final report: We loved the capable performance, but the infotainment system was irksome 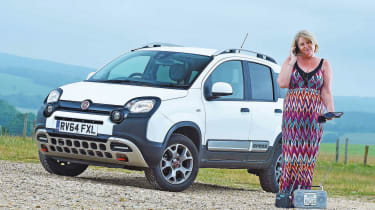 It has some annoying traits, but the Panda Cross is a great car. Being a practical city car with the bonus of an excellent four-wheel-drive system certainly makes it stand out from the crowd. The sprightly engine means it’s fun to drive, even if it’s not the most economical choice.

Our Fiat Panda Cross was lots of fun during its time on the Auto Express fleet. As well as taking some surprisingly tough off-road trails in its stride, it proved itself comfortable and competent while racking up motorway miles.

In fact, we think the little Panda 4x4 is quite capable of upstaging more expensive and allegedly more capable off-roaders on the rough stuff, and our adventures have certainly proved the Panda Cross has the cahones to handle the action that most owners will throw at it. All in all, it’s robust charm and breadth of ability made it one of my Auto Express fleet favourites.

There were some issues mind you, and while the driving experience was by and large enjoyable we were less impressed with the infotainment system, which is unduly frustrating to operate. 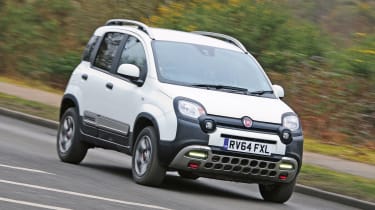 The Blue&Me connectivity system co-developed with Microsoft ten years ago is frankly not one of the most intuitive or user-friendly set-ups around.

The Panda installation had a TomTom satnav located on top of the facia in its own cradle, and while it’s easy to remove when you’re out of the car, in most other respects it’s a bit of a pain.

As well as being slow to use when you’re trying to set up options, the rigmarole required to connect a Bluetooth phone is enough to have you hopping mad.

For starters you have to scroll through various menus to reach the set-up page, then the connection itself takes an age while the car tries to find your phone. When it finally makes contact, and you think you’re ready to roll, all too often the connection fails and doesn’t work after all. Very frustrating if you’ve already driven off, and have to stop to try all over again. 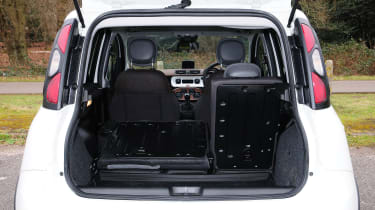 We weren’t too delighted with the radio either, as there’s no DAB facility which upset some of our more technically-minded team. The FM mode isn’t great either, as we found it hard to find stations and keep locked onto the signal, while a permanent hiss from the speakers meant we always felt the radio wasn’t quite tuned in… very distracting while on the move.

In a previous update, I reported that the paint on one of the wheels had started to flake off; but thankfully, this was rectified by Fiat under warranty, so the Panda Cross soon looked lovely again.

Putting these negatives aside, it was a sad day when Fiat came to collect the car, as I really enjoyed living with the diminutive off-roader. It’s very practical for its size, and I managed a few trips to the tip with the boot crammed full of garden waste and other bulky household items. 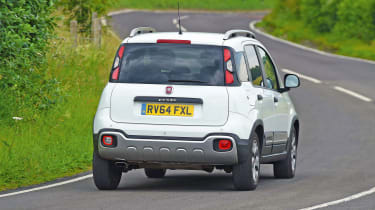 The plastic boot liner and metal-backed rear seats are excellent, as they are a lot easier to clean than a carpeted boot after a messy trip to the recycling centre. And although the boot isn’t the biggest around, with the rear seats up it still has plenty of room for a weekly shop. Plus, most importantly, the bag hook means bottles of wine don’t smash on the journey home...

The driving experience is the Panda’s strongest suit, though, as it puts a smile on the face of anyone who gets behind the wheel. The high seating position provides great visibility, while my grandchildren Evie and Oscar loved seeing where we were going out of the big windows. There was plenty of room for them and their car seats in the back, too.

Most Panda Cross owners won’t tackle much more than a muddy track, but it was reassuring to have four-wheel drive there. It just added another string to the Fiat’s bow, making it a car that we were sad so see go.

Cute, rugged baby’s versatility is just what the doctor ordered 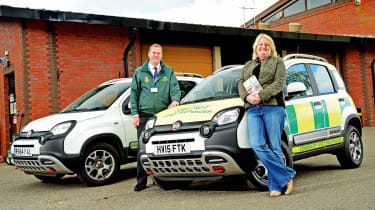 I’ve been a volunteer first aider at Auto Express for around nine years now. My training’s come in handy on a few occasions to deal with cuts and bruises, the odd fainting fit and even a cardiac arrest on the forecourt at Watford Gap Services on the M1 that saw the air ambulance called out to assist.

First aid knowledge is useful to have, but I was intrigued when Auto Express reader and Community First Responder (CFR) Gary Hammond got in touch. Gary’s a volunteer for the South Central Ambulance Service, which has just taken delivery of a Fiat Panda Cross response vehicle. With my interest piqued, we took our Panda Cross down to the Stoke Mandeville Ambulance Station in Aylesbury, Bucks, to find out more. 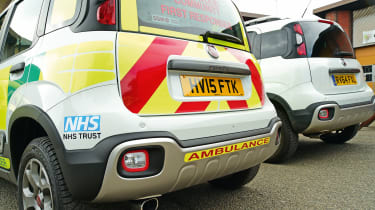 Gary has been a CFR volunteer for around four years, and he explained: “We provide early and often vital intervention for patients suffering life-threatening emergencies, using life-saving skills and equipment like an automated external defibrillator.”

Up until a couple of weeks ago, Gary had to use his own vehicle when on a call-out, but thanks to some serious fundraising, the South Central Ambulance Service now has a fully liveried and kitted out Panda Cross. And it fits the bill perfectly, according to Gary. 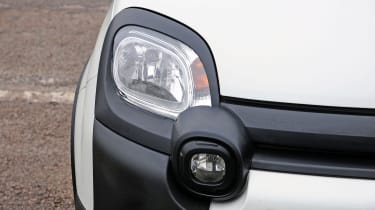 “My first call-out in the Panda Cross was to someone who lived up a rutted track, which would have taken its toll on my own car,” he said. “But the Panda took it all in its stride and got me there safely and quickly.”

Like our Fiat, the South Central Ambulance Service’s car features the gutsy two-cylinder turbo TwinAir petrol engine, which is great when you have to get somewhere fast. And while the Panda has compact dimensions, the boot is still big enough to hold all the equipment Gary might need, including the defibrillator and even a birthing kit.

However, Gary does share our gripe with the Panda’s headlamps – which are dismal to say the least. Even with the angle adjusted for the extra equipment on board, they simply don’t light up enough of the road in front of you. Luckily for Gary, his Panda is due to be fitted with high-beam roof lights, which will help no end.

Poor headlamps aren’t the only problem we’ve endured, as the paint on one of the wheels has started to flake off dramatically. Hopefully this will be covered under warranty and should be easy to fix. 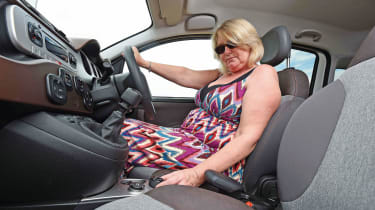 Despite these niggles, the Panda Cross is still a firm favourite on the Auto Express fleet, and its cheeky character leaves most people smiling. Editor-in-chief Steve Fowler fell for its charms when he took it for a few days.

However, while he enjoyed the drive, the fuel economy did leave him rather stunned, as it didn’t return much more than his Range Rover Sport – to extract its best performance, you have to work the Cross’ engine quite hard. Not that this poor fuel consumption detracts from the fun factor. 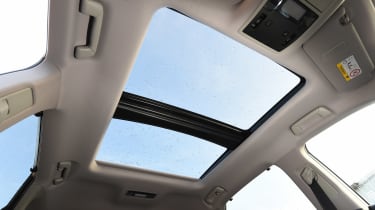 Digital content editor Tom Goodlad also borrowed the keys for a trip home to Devon, where the Fiat proved perfect on the winding country lanes and was surprisingly comfortable on the motorway, too. Even staff photographer Pete Gibson was won over when he managed to fit all of his camera gear in the boot.

While medical emergencies are slightly beyond our Panda’s reach, it’s perfect for anyone needing a dose of driving fun after a hard day in the office.

We get down and dirty with chunky new supermini-SUV

When handed the keys to a brand-new car, most owners become obsessed with keeping it clean. They think nothing of spending every weekend with either a bucket and sponge in hand or visiting their local car wash ensuring their new pride and joy remains in pristine condition. And woe betide anyone who drops the tiniest spec of dirt on the newly vacuumed carpets or leaves an innocent sweet wrapper in one of the door bins.

Nothing wrong with that I hear you mutter, but when I finally got my hands on our fleet’s new Fiat Panda Cross, the first thing I wanted to do was to get it as dirty as possible. And it didn’t take me long to find a muddy puddle or two to put the chunky little 4x4 to the test. 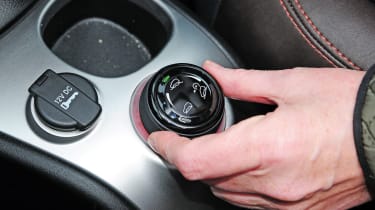 The cheeky Panda is as much of a hoot to drive on the road as off it. Its lively two-cylinder 875cc TwinAir engine thrums along tunefully and it keeps pace with other road users surprisingly well. Together, we’ve already embarked on several fairly high-mileage journeys, which have included a mixture of motorways and A and B-roads – all of which the Panda has tackled with relish.

Plus, we’ve definitely had fun on the more challenging muddy stuff. With just a turn of the terrain control switch, the Fiat becomes a very capable off-roader – albeit a small one.

Not only does it feature a locking rear differential for extra traction in the really slippery stuff, it also has the same sort of electronically regulated hill descent control found on much larger (and much more expensive) SUVs. 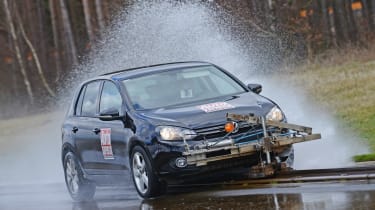 Plus, I love the chunky, bright-red towing eyes that poke out from the front bumper. Not only do they look great, they’ll come in handy in the unlikely event that the car needs to be pulled out of the mud.

Unfortunately, it hasn’t all been plain sailing for our Panda. Not long after it joined the Auto Express fleet, it was broken into while parked in a central London car park. The perpetrator – who has now been caught thanks to some hi-tech forensic detection – smashed the driver’s window and stole the Blue&Me TomTom sat-nav. Very annoying!

National Windscreens replaced the window at a cost of £95 and Fiat kindly fitted a new TomTom and cradle for me, restoring my Bluetooth and navigation facility. It’s an intuitive set-up that features decent graphics – helping to make light work of unfamiliar locations. However, I now make sure I detach the unit and slip it into my bag every time I leave the car.

Another neat touch that I’ve been really grateful for during the recent cold weather is the £250 optional Winter Pack. This incorporates a heated windscreen – meaning no more freezing hands scraping the ice away – plus, my favourite, heated front seats, which warm up quickly and help keep me toasty even on the chilliest of days. 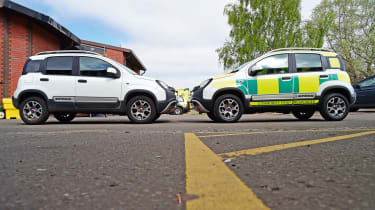 So far, then, I’m loving the Panda Cross, and I’m certainly in no hurry to clean it. In fact, when those around me are spending their Sunday afternoons with a bucket, sponge and chamois, I’ll be heading off the beaten track in search of more muddy adventures.