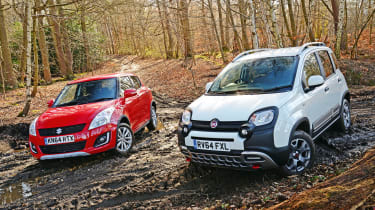 Shopping for a supermini? You’ll find an abundance of models on the market vying for your hard-earned cash. But if you’re looking for one that offers four-wheel drive, your choice is severely diminished.

However, there are two manufacturers that have a long history of shoehorning four-wheel-drive systems into small production cars: Fiat and Suzuki.

The Italian brand has included an all-wheel-drive Panda in its range for over three decades, and the new Panda Cross is its most rugged and extreme version yet. 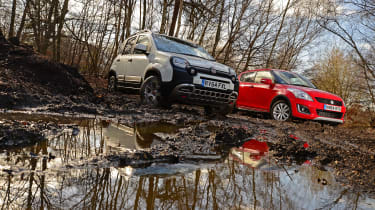 Featuring a sophisticated electronically controlled transmission, a more powerful version of its characterful TwinAir engine and tough looks, it means business both on and off the road.

The new Suzuki Swift 4x4 doesn’t have the Fiat’s extrovert streak, but packs the Japanese company’s extensive all-wheel-drive know-how into one of the most underrated and fun-to-drive superminis money can buy.

So, which of our mini mud-pluggers will scrabble to victory in this rough and tumble encounter?

Click the links above to read individual reviews, and scroll down to see which dinky off-roader comes out on top... 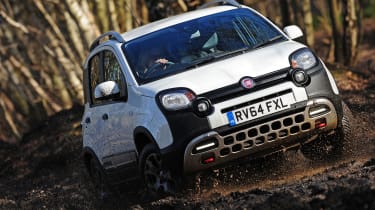 Fiat has gone all out to transform the Panda from a humble city car into a rugged off-roader. With its tough body cladding, raised ride height, large towing eyes and bespoke grille treatment, it looks ready for anything. But the Swift 4x4 fails to make the same impact. Silver-finished skid plates, plastic wheelarch trims and 25mm raised suspension are the biggest clues to the car’s all-wheel-drive underpinnings. 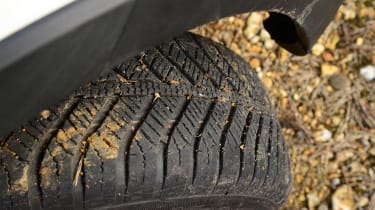 Reduced ground clearance isn’t the only hindrance to the Swift 4x4’s off-road performance, because it’s also hobbled by its low-profile summer tyres – they struggle for grip in muddy conditions. The Panda’s mud and snow rubber is much more effective in the rough stuff. 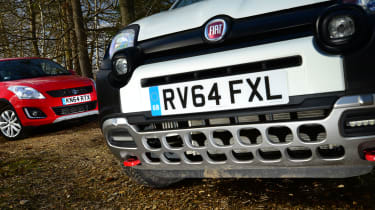 These compact cars are both capable of pulling small trailers – the larger-engined Swift 4x4 has a towing capacity of 1,000kg, while the Panda Cross manages 800kg. However, the standard Fiat Panda 4x4 took victory in the under £15,000 category of the 2015 Tow Car of the Year awards. 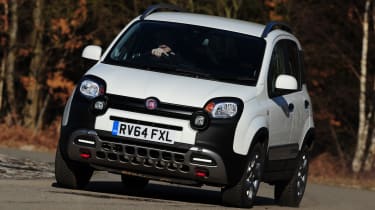 The rugged and characterful Panda Cross takes a well deserved victory in this encounter. It’s far and away the most capable small 4x4 money can buy, and is equally at home clambering up a muddy hillside as it is darting around crowded city streets. And while the TwinAir engine is thirsty, it’s a punchy performer. It’s expensive, but no other small car can match the Cross’ unique blend of talents. 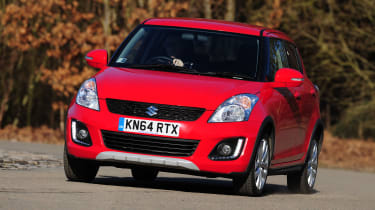 In two-wheel-drive guise, the Suzuki Swift is still one of our favourite superminis. Yet in 4x4 guise, it doesn’t make as much sense. It’s still fun to drive, solidly built and well equipped, but it doesn’t offer enough extra versatility and all-weather security over the standard car to justify its higher price or increased running costs. With more power or greater off-road focus, the Swift would shine.