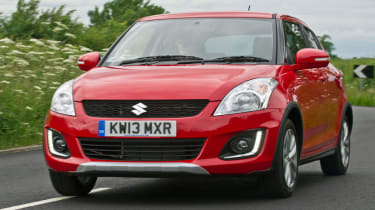 The two-wheel drive Swift is still one of our favourite superminis. But in 4x4 guise, it doesn't make much sense. It's still fun to drive, solidly built and well equipped, but it just doesn't offer the extra versatility and all-weather security to justify the price premium over the standard hatch. If the car had more power or greater off-road credentials, the Swift 4x4 would shine.

Suzuki has a long history when it comes to four-wheel-drive vehicles – the Jimny 4x4 was introduced in 1968, and the brand has become synonymous with affordable and capable off-road vehicles.

Now its all-wheel-drive know-how has filtered down to the Swift supermini. It’s not a full-on off-roader, but a raised ride height and rugged body cladding show the car means business.

The Swift 4x4 is available in two trim levels: SZ3 and SZ4. Opt for the former and you’ll get 25mm of extra ride height over a standard Swift five-door, a 4x4 badge on the boot and, well, that’s it! Designers have made a little more effort to beef up the SZ4 we tested. Front and rear plastic skid plates, black wheelarch extensions and black side skirts have been added to give it a more rugged look. 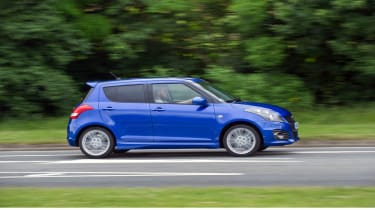 The theme continues inside, where the 4x4 is identical to the standard Swift. There’s not much wrong with the robust build quality, but the plastics are all hard to the touch, while their dark colours create an oppressive feel.

Engine-wise, the Swift comes with a 1.2-litre DualJet petrol engine putting out 89bhp. It's cleaner and has more torque than the engine it has replaced, but it can still feel flat and underwhelming, plus it needs to be worked hard.

On the plus side, the Swift 4x4 features sharp handling. It also sits on larger and lower profile tyres, which means there’s more grip and composure during extreme cornering. Body movement is also well controlled, plus the Swift does a good job of soaking up most bumps and potholes. And although the car’s acceleration is leisurely, there’s still fun to be had on twistier B-roads. 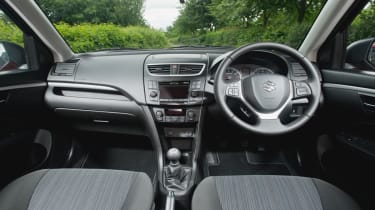 The Suzuki is less assured when you leave the tarmac behind. Anything more than a slightly muddy track will cause it to struggle. The permanent four-wheel drive transfers the torque to the rear wheels when needed via a viscous coupling, so traction is rarely an issue, but when the terrain gets rugged, the Suzuki’s supermini roots are difficult to overlook.

The new cleaner 1.2-litre Dualjet has been engineered not only to reduce friction, but to create a more efficient fuel-air mixture, thereby reducing fuel consumption. More impressively, the new unit has slashed CO2 emissions from 126g/km to 111g/km.

Factor in the Swift’s list price and it works out as a tax efficient choice for business users, while private buyers will pay just £30 a year for road fund licence. Suzuki claims a substantial increase in fuel figures, too, with 58.8mpg for the 4x4 model.

Inside, rear seat passengers get a decent amount of legroom – although headroom is slightly tight for taller passengers. There is, however, plenty of useful storage, including a deep centre console cubby, large glovebox and long door bins.

Less impressive is the boot, which suffers from a tiny 211-litre capacity. Unfortunately, it’s further hindered by its small opening and a very high load lip, making lifting heavy items in and out a challenge.

The Swift gets 40:60 split rear seats, but they create a steep step that can prove intrusive when carrying larger items.