The birth of a new Panda is an event that’s guaranteed to attract attention. 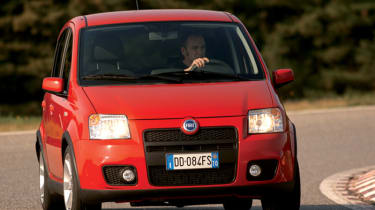 This version of the Panda is a fast and entertaining small car. It has enough Latin fizz to be an engaging proposition, yet still retains plenty of everyday refinement and practicality. And the low price makes it even more appealing. It leaves you wondering what sort of car it might be if the Abarth tuning arm was allowed near the engine and chassis. Go on Fiat, you know it makes sense.

The birth of a new Panda is an event that’s guaranteed to attract attention. So when Fiat revealed it was launching a fresh 100bhp version of one of our favourite city cars, it’s no surprise there was a dash to be first behind the wheel!

On the outside, the performance newcomer shouts about its intentions with a series of changes to the stan­dard five-door bodywork. There’s a sporty front grille as well as extended wheel­arches and wider side skirts.

Deeper front and rear bumpers add the finishing touches, while the whole lot is then lowered by 20mm. Comple­ting the package are attractive 15-inch alloy wheels wearing low-profile tyres.

Inside, the improvements are more difficult to spot. However, in an effort to raise the cabin ambience, the firm has included heavily bolstered sports seats and a three-spoke leather steering wheel as standard.

There’s also a new button, marked Sport, which drivers can press to firm up steering feel and sharpen throttle res­ponse. This set-up has the opposite effect to the City button in standard Pandas, which lightens the steering to make the car easier to drive.

Yet despite the improvements that have been made to the styling and the interior, it’s the new engine that’s the real star of this Panda. The 100bhp 1.4-litre 16-valve powerplant drives the front wheels through a six-speed gearbox. It propels the tiny tearaway from 0-60mph in 9.5 seconds and then sees it through to a 115mph top speed.

Even so, drivers will still need to rev the four-cylinder unit hard to make the most of its pace. Below 4,000rpm, it all feels lethargic. We were surprised the newcomer’s ride isn’t sportier as well. Despite the fact that the springs are not only 20mm lower, but 25 per cent stiffer than standard, the 100HP Panda is still capable of ironing out potholes with a minimum of fuss.

On the uneven roads of our test route, that was a welcome relief. How­ever, the compromise was that the Fiat reveals a fair degree of roll in corners. However, the car is still fun to drive, while its compact dimensions mean it’s as capable around town centre streets as it is on winding roads.

And it represents fantastic value for money, too. For £9,995, you get a whole host of equipment as standard, including climate control and Bluetooth wireless mobile phone connectivity. This is on top of the existing Panda attrib­utes of decent quality, well thought-out design and Italian charm.