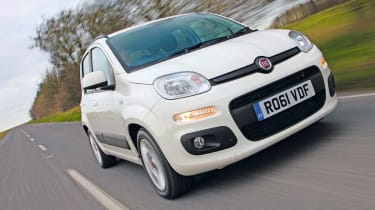 It’s easy to see why the Panda sold so well in the past, but with competition as fierce as it is in the city car class, has Fiat done enough? A disappointing four-star NCAP result and meagre equipment levels could be off-putting, but what the Panda does deliver in absolute abundance is stylish, fun-filled, affordable motoring.

Small cars are what Fiat has always done best, and the Panda certainly proves it. Over the last 31 years, the firm has sold more than 6.4 million of them, so the latest model has a lot to live up to. Believe it or not, this all-new Panda is only the third incarnation of the popular city car – And thankfully Fiat has decided not to stray too far from the existing template.
While the new Panda has had a complete overhaul, it retains its cheeky looks. It’s longer, wider and taller that the old model, and Fiat has replaced the boxy lines with a softer look, which it has called 'Squircle'. Daytime running lights and body-coloured bumpers are standard, and coupled with the large expanse of glass, Fiat has given the Panda a modern, stylish makeover.

The ‘Squircle’ theme continues inside. The button surrounds, instruments, gearlever and even the handbrake all have the rounded treatment, and the dashboard looks smart and practical. Plastics have been upgraded, too, and now give the cabin a more sophisticated feel. The newcomer has kept some of its origins - the roomy storage pocket on the dash harks back to the first Panda, and it also boasts another 13 on-board stowage bins, including a lockable glovebox.
Even with the extra length, rear passengers will be disappointed with the legroom on offer, as their knees brush the back of the front seats. However, the boot has been increased to 225-litres, which matches the Hyundai i10 for space. The Panda's versatility will be boosted by an optional sliding back seat, which will be offered from September. And while the Panda only gets two rear seats as standard - a middle seat, third headrest, seatbelt and a 40/60 split-fold can all be specified at a cost.
On the road, Fiat's second-generation 1.3 16v Multijet diesel suits the Panda perfectly. With increased torque – 190Nm at 1,500rpm – it offers greater flexibility at low speeds and an effortless cruise on the motorway. The Panda is equally at home in town as it is on the open road, thanks to the reworked suspension and tweaks to the rear axle. Light steering and a precise turn-in make the Panda a breeze to drive, and if you push the ‘City’ button the wheel becomes even easier to turn. Stability at speed is excellent, and the lack of body roll allows the drive to push on with confidence.
The diesel Panda gets stop/start as standard, which helps it to produce a CO2 figure of 104g/km and return combined fuel consumption of 72.4mpg.
Share this on TwitterShare this on FacebookEmail