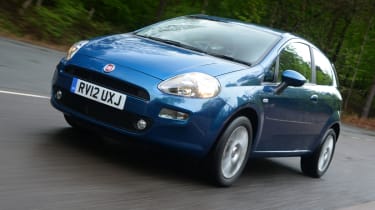 The revised Fiat Punto has a stylish design, but is let down by an unsatisfying driving experience. It’s totally outclassed by its rivals in terms of dynamics and resale value. It’s still competitive when it comes to running costs and price, although that’s just not enough to convince us.

The revamped Fiat Punto has arrived in the UK, complete with colour-coded bumpers and a choice of three new exterior paint colours. Inside, there’s a revised dash layout and new trim levels – but the question is: has Fiat done enough to ensure the car is competitive with newer rivals?
Advertisement - Article continues below
It looks pretty good, if a little awkward on the £200 optional 16-inch alloys that were fitted to our test car. We also had the £155 foglights and £450 Brit Pop Blue paintjob.
There are still some clever design touches, such as the Fiat badge that doubles as the boot latch, but overall this is a car that’s really showing its age.
It’s a similar story inside. The cloth-covered seats are a little on the firm side, while the driving position feels too high – fortunately, the steering column adjusts for rake and reach. The wheel itself is wrapped in leather, yet it still feels rather low-rent, as does the small gearknob.
The dashboard dials are easy to read, but their finish is far from opulent. In fact, the less expensive Panda has a more upmarket cabin. As for rear legroom, tall passengers will find it a bit of a squeeze.
Advertisement
Advertisement - Article continues below

Equipment is generous, however, with electric windows and remote central locking included as standard. There are also driver, passenger and knee airbags. On the downside, the stop-start system can be quite slow to react in traffic, which isn’t ideal.
Advertisement - Article continues below
The Punto’s five-speed gearbox is well suited to town driving, yet the electric power-steering gives much less feedback than the system in its main rival, the Ford Fiesta. The Fiat’s turning circle is also a lot wider than you’d expect for a supermini.
Ride quality is excellent, though: the Punto deals well with bumps and rough surfaces. In contrast, the car’s handling is compromised by vague steering, that high driving position and sloppy body control.
It’s okay for running around town, but keen drivers will need to look elsewhere for thrills. The brakes are a strong point, though, with good pedal feel and bite, which inspires plenty of confidence.
The new 1.4-litre petrol engine is one of the revised Punto’s best features. With fuel economy and CO2 emissions of 49.6mpg and 132g/km respectively, it’s on a par with the Ford Fiesta’s 1.4-litre petrol. It’s smooth at idle, but you really need to work it hard to get decent oomph.
Fiat hopes to shift 10,000 Puntos in 2012, with the 1.4-litre expected to be the volume seller. However, while potential buyers will be attracted by the fact that this car costs slightly less than its rivals, they’ll have to balance that against its cheaper feel and inferior driving experience.
Advertisement
Share this on TwitterShare this on FacebookEmail
Advertisement