We drive the 2012 Fiat Punto, which now gets the firm's efficient TwinAir engine 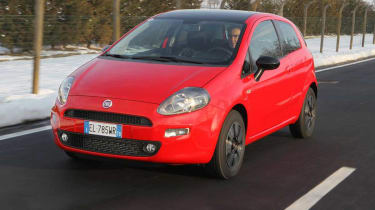 The Punto has sold in huge numbers across Europe, and the TwinAir adds to its cheeky appeal. Some will like the characterful engine, but others may find it annoying. However, the styling tweaks keep the Punto fresh, and no petrol rival can match the TwinAir’s claimed economy or emissions figures, which will make it an appealing buy for some.

This new Punto is the latest and largest car in the Fiat range to get the ultra-low-emissions TwinAir engine. The 84bhp two-cylinder turbocharged engine perfectly suits the Fiat 500, but does it still make sense in the heavier Punto?
Advertisement - Article continues below
With claimed fuel economy of 67.3mpg and CO2 emissions of 98g/km, the Punto TwinAir is off to a good start: it’s road-tax free and exempt from London’s Congestion Charge, too.
Accelerate from low revs and the engine makes a distinctive thrum. Some vibrations reach the cabin, but a dual-mass flywheel and different engine mounts keep the intrusion to a minimum.
The suspension soaks up bumps well, and the direct steering is nicely weighted. On the motorway there’s a little wind noise around the mirrors, but generally it’s relaxing to drive.
Matching the claimed economy will be a challenge, though; we only managed 53mpg. An Eco Drive button cuts torque from 145Nm to 110Nm, a gearshift indicator helps you maximise efficiency and stop-start is fitted, but the engine has to be worked hard to get the best from it.
Fiat has given the Punto a bit of a refresh, too, with new body-coloured bumpers providing a smarter look. The cabin gets some new materials and colours.
TwinAir models are set apart by gloss black mirror housings and side pillars, with an optional gloss black roof, while there are TwinAir logos on the headrests, tailgate and next to the standard climate control switch.
At £12,100 for the three-door and £12,700 for the five-door, the TwinAir sits between petrol and diesel rivals on price, and on economy and emissions, too.
Diesels such as the Ford Fiesta ECOnetic and VW Polo BlueMotion use less fuel and emit less CO2, but cost at least £2,000 more. The Kia Rio 1.1 1 EcoDynamics is a couple of hundred pounds cheaper, but not as well equipped as the TwinAir, nor as stylish.
In the Punto range, the TwinAir is closest to the 1.4-litre 77bhp Easy, which is £800 cheaper. For that small premium, the TwinAir adds some sporting design touches, but has far better performance and economy.
Advertisement
Share this on TwitterShare this on FacebookEmail
Advertisement