High on style, low on price... but which generation of the enduring supermini makes the best used buy? 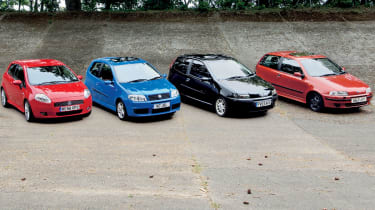 Grande Punto With sales of the Grande Punto up by 140 per cent over the previous generation, the used car spotlight has been thrown on Fiat’s supermini range. But is the latest model the best buy?

It’s 200mm longer than its predecessor, and while the cabin is roomy, it’s not much bigger. But the car is far more refined and fun to drive. Best petrol engines are the 77bhp and 95bhp 1.4-litres, as the 65bhp 1.2 is too weak.

Most powerful choices are the 120bhp (above) and 130bhp 1.9 JTDs, while the 1.3-litre oil-burners can return 60mpg. But unlike some small diesels, they fall outside road tax band B. The Grande Punto scored five stars in Euro NCAP crash tests, and all but the base Active get six airbags. Every car has ABS, a CD player and remote central locking. Air-con arrives with Dynamic trim, but an auto is an option only on the 77bhp 1.4 petrol and 90bhp 1.3-litre diesel.

Problems to watch for include creaky suspension, and some interior material quality which isn’t top-notch. One owner we spoke to had a water leak in the passenger footwell – a Punto glitch of old. Used prices are now below £7,000 for early 1.2 and 1.4-litre cars, but strong demand is keeping values of other models high.

Punto MkII facelift if your budget can’t stretch to the latest Punto, how about a revised MkII (above)? Arriving in 2003, it saw a step up in cabin quality over the model it replaced, while behind the fresh grille, buyers could choose from a pair of new Multijet diesels: a 63mpg 1.3 and 100bhp 1.9-litre.

More powerful 1.2-litre petrols offer the option of the CVT auto, and a clutchless manual is available with the 1.3-litre diesel or entry-level 1.2-litre petrol engines. Softer suspension provides a better ride than the MkII’s.

Generous equipment means Dynamic trim brings air-con, while ABS is standard on all but base eight-valve petrols. Central locking and front electric windows feature on all variants.

The car remained on sale after the launch of the Grande model last year, so late Puntos still fetch above £5,000. A remainder of the warranty will be useful to fix the glitches, but residuals of 30 per cent mean all variants will depreciate heavily – early examples are the best value.

Punto MkII behind the nose of this dramatic Punto was a new range of engines. Buyers could choose from 1.9-litre JTD common-rail diesels or the 130bhp 1.8 petrol in the HGT. Most plentiful second-hand are the two frugal 1.2-litre petrols; the 16-valve 80bhp commands £200 more than the eight-valve 60bhp model.

Go for the Sporting version, and the extra equipment (including the option of a CVT auto) and bodykit add around £800. The HGT (above) isn’t that fast, but it gets air-con and sat-nav. While group 14 insurance keeps prices down, it has a stiff ride and uninvolving handling. There is an Abarth, yet its upgrades are cosmetic only.

Service intervals are every 12,000 miles, and the engines are reliable, but a juddering clutch and creaking rear suspension are common. Front discs can wear unevenly (check for jerkiness on hard braking), and warning lights illuminate randomly. Door seals are prone to leaks, and ECUs – at £400 each – can fail. Tapping in the HGT indicates timing valve variator trouble.

Prices start at £1,100, and another £500 will buy you a flagship HLX, with air-con. All cars get the ‘City’ button to lighten the already effortless power-steering, as well as a Blaupunkt stereo.

Punto MkI Low prices and insurance-friendly engines attract young buyers to the original Punto. Launched in 1994, it had a fully galvanised body, so rust shouldn’t be the issue it is on older Fiats. Economical 1.1-litre and 1.2-litre petrol models were badged 55 or 60, which relates to their power outputs. Both are sparky, but the 16-valve, 86bhp 1.2-litre Sporting is our pick, with the looks and pace of a junior hot hatch – and group four insurance.

While the body won’t corrode, the brake pipes do. Fiat recalled all MkIs in 2001 to fix this; make sure the work is done. As exhausts rust, inspect the brackets and downpipe, too.

If the rear wheels point inward at the top, the suspension bushes have gone. Bush kits cost £60, yet fitting is tricky, so get a quote for the work. A damp passenger footwell hints at a broken heater matrix, while head gasket failures aren’t uncommon. Early cars start from £400, but buy on condition and mileage rather than age.