Our verdict on the updated Fiat Punto, which is now available with the company's efficient TwinAir engine 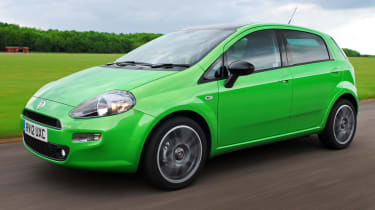 The Punto TwinAir is without doubt the most characterful engine found under the bonnet of a supermini today, and the low CO2 emissions mean there’s no road tax to pay. However, real-world economy isn’t as good as Fiat would hope, and along with the dated chassis and poor interior plastics the rest of the package struggles against a Fiesta or Polo.

Forget the majestic titles of Grande and Evo, now it’s just plain old Punto for Fiat’s updated supermini – and the simplified badging is joined by a new TwinAir engine, too.

At start-up you do wonder if it will deliver, though. The noise that penetrates into the cabin is unlike any other supermini, but on the move that’s all forgotten.

The unmistakable thrum is always present, and the harder you push the motor the louder it is, but it’s a note that has been especially designed to appeal to keen drivers.

The throttle response is sharp, and the Punto TwinAir encourages drivers to explore the rev range, which is just as well since peak power doesn’t arrive until 5,500rpm.

Thankfully, all of the TwinAir’s torque arrives at 2,000rpm so it’s flexible around town. It also boasts the firm’s stop-start system and a gearshift indicator, as well as the CITY button which makes the steering lighter for parking manoeuvres. However, away from built-up areas this Punto will struggle to return Fiat’s claimed 67.3mpg combined economy figure.

That’s all down to the engine, though, as the chassis is beginning to feel its age. It hangs on gamely, but there’s no finesse and the steering lacks feel; a Ford Fiesta is much more involving. Add in the optional 17-inch alloys of our test car and the ride becomes very hard.

At least the TwinAir looks good and is well equipped, benefitting from body-coloured trim, gloss-black mirrors, air-conditioning and special TwinAir seats which brighten up an interior that’s starting to feel a bit tired these days.