"Ford should build EV facilities outside London, after selling Dagenham for billions" 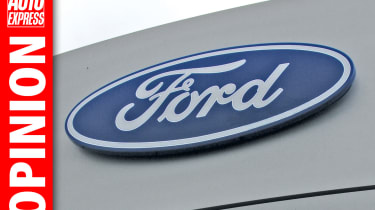 I understand and believe that Ford will close and demolish its sprawling Dagenham factory in East London that once boasted 40,000 workers but now employs nearer 4,000. Born in 1931, it went on to occupy 620 acres of Thameside space. Yet I fear it may not reach its 90th birthday.

Ford no longer builds vehicles in Dagenham (or anywhere else in the UK). Instead it uses the site to make internal combustion engines that will soon be illegal and unsaleable.

But Dagenham’s likely death as a motor industry town shouldn’t lead to a further loss of Ford jobs in Britain. Minutes away in Essex there is ample space to accommodate quiet, low-impact and landscaped sites for Ford and its partners. They’ll design/build the battery packs and electric motors that’ll inevitably power blue oval-badged vehicles.

An hour or so further up the road is East Anglia – a region blessed with much under-utilised land, plus keen workers ready to sign up for the EV revolution that’s coming.

The icing on the cake is that many of Ford’s existing Dagenham workers already live in Essex and East Anglia. Zoopla values the average London home at £658,000 – way beyond production line staff at Dagenham. Their modified, futureproof jobs need to head out to the north east of the bottom half of Britain.

Transforming an inner city diesel/petrol engine factory into a modern battery and EV motor facility makes as much sense as converting a coal mining shaft into a solar energy farm. That’s why Ford must vacate London. This will be consistent with a recent formal statement from World HQ that the firm must now “become as lean and efficient as possible”.

Two non-car blokes control Dagenham’s fate. One is car-loathing London Mayor, Sadiq Khan, whose bans/fines on combustion-engined vehicles logically means he can’t have such ‘lethally polluting’ power units built on his patch – although I don’t remember this from his election manifesto.

The other is Jim Hackett, who spent a lifetime in the detergent and furniture businesses before becoming Ford CEO this year. He’s a money man, and he and his fellow bean counters have already worked out that Dagenham is hardly the most efficient, appropriate or cost-effective place to churn out engines. Instead, countless blocks of £500k-£1m apartments on that prime real estate by the Thames would give Ford a delicious profit to invest in those valuable jobs and EV facilities north east of London.

What do you think of Mike’s argument? Let us know in the comments area below...