Ford’s autonomous safety system sets up communication between vehicles and pedestrians, through a light-based “visual language” 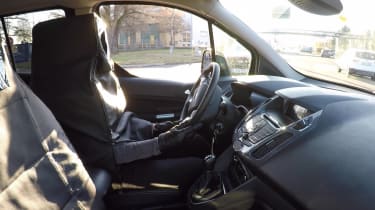 The system uses an array of lights to signal the vehicle’s intentions. Tests were conducted on public roads, with a human driver at the helm of a modified Transit Connect. To make the vehicle appear autonomous, the driver was disguised as a “human car seat.”

• All you need to know about autonomous vehicles

The “human car seat” drivers operate the van’s controls but are able to monitor the road through a false headrest. They the use a lever to operate the roof-mounted light-bar to signal their intended direction of travel. The research found that 60 per cent of 173 pedestrians believed the van was fully autonomous and trusted its signals.

Ford’s engineers experimented with different colours and patterns to see which combination produced the safest pedestrian response. Turquoise was found to be the most favourable colour, with a high number of test subjects reporting trust in the signals provided.

Further tests, with the lights mounted on the van’s grille and headlamps provided the same results, with no change in pedestrian trust levels. Developing an intuitive pedestrian/autonomous vehicle interface is part of Ford’s long-term goal for autonomous travel, with the company aiming to have a fully autonomous vehicle on North American roads by 2021.

What are your thoughts on Ford’s most recent pedestrian safety system? Let us know in the comments section below...