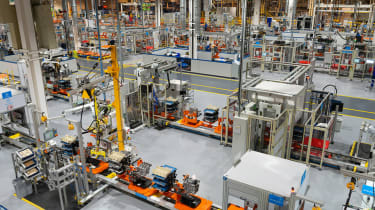 Ford has confirmed the closure of its Bridgend engine-building facility in South Wales, with 1,700 staff losing their jobs as a result.

Rumours circulated last night that the American car giant was set to close Bridgend, with a statement today confirming the "proposed end of engine production and closure of Bridgend Engine Plant in South Wales by late 2020."

A company spokesperson confirmed to Auto Express that while the plans remained "proposals" until the full consultation process had been gone through, it could be assumed the plant would close on 25 September 2020.

Some 400 Bridgend staff had already taken voluntary redundancy from the site, and its closure will result in the remaining 1,300 workers losing their jobs.

Ford's European president, Stuart Rowley, said the company remains "committed to the UK", but said "changing customer demand and cost disadvantages, plus an absence of additional engine models for Bridgend going forward, make the plant economically unsustainable in the years ahead.”

• Ford could lose £613m as a result of hard Brexit

The news follows stories earlier in the year that Ford was shedding 550 of its white-collar UK staff and, while some of those roles were at Bridgend, the company has either announced or enacted around 2,000 redundancies so far in the UK this year.

Rowley added that the firm knows "that closing Bridgend would be difficult for many of our employees”. Ford has a "comprehensive plan with an enhanced separation programme" for at-risk Bridgend workers, which will see the firm either attempt to place staff in other roles within the company, either in the UK or abroad, or put support in place to help them find work outside of Ford.

The Unite union previously urged Ford to convert Bridgend into an electric car battery and motor production facility. The site opened in 1980 and covers an area of 60 acres.

What do you think of the news about Bridgend? Let us know in the comments...