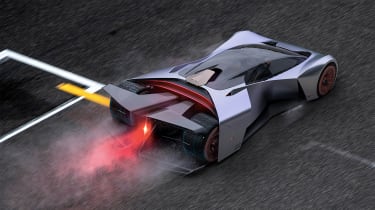 This is the Team Fordzilla P1, a new virtual car created by racing gamers in conjunction with Ford’s European design team.

Unveiled to coincide with Gamescom, a major computer gaming event, the Fordzilla P1 is named after Ford’s Assetto Corsa-based racing community. Captains from several countries’ teams were consulted on the project, and their input was then interpreted by in-house Ford staff under the design director of Ford of Europe, Amko Leenarts. In total, around 220,000 votes were cast during the process, and a team of around 15 designers worked on the project in their spare time.

The P1 is an aggressive-looking sports car with an ultra-low roofline and faired-in rear wheels, but a familiar Ford look to its front end. Ford has already committed to building a real-life scale model of the vehicle, in order to support the car’s inclusion in an as-yet-unspecified game in the first half of 2021. But while the company says that its Fordzilla community was consulted on the car’s “drivetrain”, it has not released any details of even the virtual technical make-up of the P1.

Speaking at the virtual reveal of the P1, Ford’s current Chief Operating Officer and its President and Chief Operating Officer from October, Jim Farley, said that involvement in digital media, including gaming, is going to be a key part of Ford’s strategy in the years ahead. “Motorsport is such a fundamental part of what we do when we wake up at Ford,” he said. “We’re not in a lot of forms of racing now, intentionally, but we invested heavily in the likes of Ken Block, producing media for enthusiasts. And I believe the virtual world is the most important area for us to develop new thinking that applies to our production vehicles. 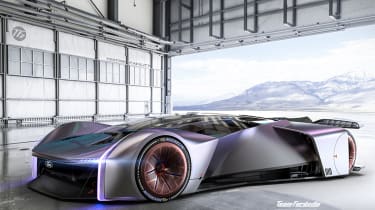 “I wouldn’t say I’d expect to sell a bunch of vehicles because we’re in virtual racing. I’d turn it around and say that just as we invested in motorsports all those years ago because we wanted to make better vehicles, it’s the same nowadays with virtual. The digital experience in vehicles has become perhaps the most important differentiator these days.

“So we didn’t do this to try to lower our average customer age or create a different attraction to the brand; I think the gaming community would see through that in a nanosecond. It’s more authentic than that. It’s about listening to a group of people who have different criteria for their vehicle selection. And to be a relevant brand in the future, that’s what a 100-year-old company does. It’s constantly reinventing itself. I’m really as excited about the brand coming alive in the virtual world as I am our physical products.”

Farley said that Ford has to consider carefully which racing games it commits technology and licensing to in future, based on demographics, technical possibilities and user base. “We want to be in the right series, authentically there,” he said. “It’s not just about presence; this is not a marketing program. It’s something more fundamental.”

He admitted, however, that the P1 project may not resonate with existing owners and buyers of Ford’s physical products. “We did this for the virtual community,” Farley said. “How it gets interpreted and received by others is secondary. It’ll be interesting for many people, I guess, and I hope they’re open-minded about it, but in a way that’s not relevant.”

Now read about the best driving games on the market...