The innovative Ford B-MAX has arrived in the UK with the company's multi-award-winning 1.0-litre engine 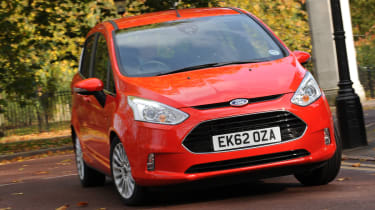 A simply fabulous Ford. The combination of the lack of a central pillar and sliding rear doors is the work of genius, while the B-MAX is more comfortable and more fun to drive than any rival. With the added bonus of the brilliant little EcoBoost engine under the bonnet, plus good quality, space and tech, this is a small car that’s very easy to love.

The new Ford B-MAX supermini-MPV is now on sale in the UK, and we were first to grab the keys for a drive through London’s crowded streets.

For anyone who’s not seen the clever TV ad – where a high diver dives straight through the centre of the car – the B-MAX’s USP is the lack of a centre B-pillar which makes getting in and out (or diving through) a doddle.

If you’re worried about structural safety, don’t be. The bits that make a car strong enough to pass stringent side impact tests are all there, they’re just in the door. And they move out of the way when you slide the rear door backwards – itself a slice of genius as anyone who’s battled to get people out of the back in tight spaces will see.

Don’t go thinking the B-MAX is just about the doors, though. This car is Fiesta-based, which means it handles superbly. Okay, so you can’t avoid the extra height making the car lean a bit through corners, but it’s tidier around bends than any rival with nicely weighted steering an added bonus. The turning circle is on the wide side, though, so you might be twirling the steering wheel more than you might expect.

When we drove the car abroad earlier in the year, we were also impressed by the ride comfort, especially as the Fiesta can feel on the firm side. So how does the B-MAX cope here in the UK? Brilliantly is the simple answer – it felt really composed over our horrible winter roads and certainly won’t turn kids in the back green.

We tested a top-spec Titanium model, pricey at £18,195. But that does buy you a car with Ford’s brilliant, multi-award-winning 1.0-litre EcoBoost engine under the bonnet, with 118bhp. You can get a cheaper 99bhp version, but the more powerful model offers great response, impressive refinement and superb economy for a petrol engine. Who’d have thought it only had three cylinders?

Inside, quality is okay – as it is in the Fiesta – while the extra height means decent space for four, or five at a push. The boot isn’t exactly huge, but it’ll be big enough most of the time and the rear seats fold easily.

Ford’s full roster of in-car gadgets also features, including the SYNC infotainment system that’ll link your phone to voice control and even read your text messages to you. Plus, there’s Active City Stop, which aims to put an end to nose-to-tail shunts.