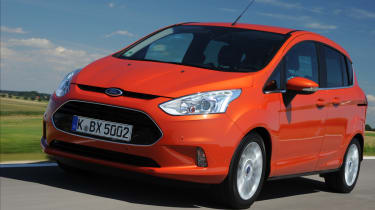 Another winner from Ford. The B-MAX caters brilliantly for the small MPV buyer and should be a major attraction for anyone looking to move a small family around. The lack of a B pillar is a clever bit of thinking that will soon be copied, while the rest of the car is as good as you’d expect from Ford – this is another Ford MPV that’s great to drive. Strong prices (and deals), decent kit levels and low running costs are the icing on this very tasty cake.

It’s ironic really, given its name, that the one thing the Ford B-MAX is missing is a B pillar.

The B pillar is the hitherto crucial bit of a car’s structure that sits just behind the front door (a at the front of the cabin, b in the middle, c at the back). It’s crucial because of the role it plays in strengthening the whole car for crash safety, ride and handling, somewhere to hang the seatbelts and something for the door to latch on to. And Ford has magically done away with it.

The result could be seen as a game changer. Don’t expect to see similar technology in the next Fiesta or Focus, but for an MPV it brings massive benefits.

Ever tried putting a child into a child seat in the back of a car? Chances are you’ll have put your back out, too. The B-MAX makes it much simpler with an open space of 150cm – double what you’d normally get.

In fact, getting in and out is simpler for anyone. Removing the B pillar means more space inside, while sliding doors help in tight parking spaces – no more door dinging.

The doors are also nicely weighted, so they’re not too heavy if you’re closing them on a slope, and don’t slide shut dangerously, either. The rear windows open to a decent level, too.

But does all that make the B-MAX a one trick pony? Not at all. It’s based on a Fiesta – the best supermini to drive by a country mile. So it’s no surprise that the B-MAX is the best small MPV to drive by a similar margin – it makes the nimble Nissan Note feel lead footed, while the Vauxhall Meriva feels stodgy by comparison.

You can’t ignore the physics of the thing, so the extra height of the B-MAX means it still rolls a bit through bends and can feel a bit bouncy over dips and crests – it’s no Fiesta. But it handles in a way you wouldn't expect a car like this to handle: the steering is light, precise and quick to react (although the turning circle is quite wide), while there’s more grip than you’ll need and safety systems for back up if you should ever run out. Who’d ever have thought such a workaday car could be such fun?

Equally impressive is that fun doesn’t come at the expense of comfort – the ride quality is great: smooth over lumps and bumps and more comfortable than a Fiesta.

You can decide whether the B-Max looks good or not, but to our eyes, Ford’s latest interpretation of its Kinetic Design language has done a decent job of disguising what has to be an awkward shape (short wheelbase, tall body). It’s not as pretty as a Fiesta, for sure, but again it makes the Meriva and Note look a little dumpy.

Behind those clever doors lies a cabin that will be familiar to Fiesta drivers in all but proportions. There’s enough rear legroom for a six foot tall passenger to sit behind a six foot driver with space to spare, and you could wear a top hat, too. Three across the back will have to be very close friends, but it can be done. There are cup holders for all three and storage nets for the outer passengers.

The boot is an okay size (remember this is a supermini-based MPV) with more than 300 litres of space, whether you opt for the space saver tyre or puncture repair kit.

There’s a clever two stage boot floor and with it in its higher setting, a flat floor when you fold the 60/40 split rear seats forward – which you can do easily with one hand.

Up front, it’s pure Fiesta, if taller. The dash is near identical – some will love its style, but it’s not exactly an ergonomic masterpiece – there are far too many illogically scattered buttons for that.

The dials are clear, though, and the chunky steering wheel can be adjusted up and down, and in and out to ensure a decent fit for all. The gear lever is taller than in a Fiesta, but in exactly the right place and shifts superbly – smooth, but still with plenty of feel.

You’ll have to get used to hunting for the seat belts in the front, though. With no B pillar (did we mention that?) they’re mounted on the seats, and rather stylishly, too. But if you usually flick your hand backward to grab it, you’ll have to be double jointed to find it, especially as it had a habit of hiding around the corner of the seat in our cars. No, you’ll just have to adjust your seatbelt grabbing motion and do it with your other hand or twist your body around.

The only minor disappointment inside is with quality, and I did say minor: this is no Volkswagen. There are nice squishy plastics on the top of the dash, but harder, scratchier surfaces on the door tops, around the air con controls, on the glovebox and on the centre console. And, just like the Fiesta, some of the cheapest looking and feeling door handles known to man – they’re crying out for a tiny bit of chrome.

Ford’s latest tech features are all present and correct, from Active City Stop to prevent low-speed front/rear bumps to SYNC voice control. Sadly, those features are options on most models, but they work well and are well worth choosing for only a small increase in cost.

Top spec Titanium models also get a Sony stereo, which was a surprisingly good performer on our test – certainly a cut above the norm at the price. Every model gets a DAB digital radio.

Titanium also gets you 16-inch alloys, SYNC and automatic wipers, lights and dimming for the rear view mirror. In spite of the cost (from £17,595), Titanium will be the second most popular trim level after Zetec, which gets the usual sporty trim bits (including alloys) and LED daytime running lights. Zetec list prices start at £15,600 with Studio being the entry trim (and still coming reasonably well kitted out) from just £12,995.

We drove the 94bhp 1.6 TDCi Duratorq diesel in Titanium trim which tops the price list at £18,895 before options. It’s quite a pokey diesel with 215Nm of torque from 1750rpm, certainly better than a 0-62mph time of 13.9 seconds suggests. It’s the greenest B-MAX currently available with claimed emissions of just 104g/km, equating to 70.6mpg. It lacks a touch of refinement, though – it’ll groan a bit when you accelerate.

The petrol models will be more popular, notably the 1.4, although the superb three-cylinder 1.0-litre EcoBoost engines are growing in popularity as buyers look past the size at the power, economy and refinement benefits. With such advanced engines, it’s just a shame you have to go for the old-school 1.6 to get an automatic, with average economy in the mid 40s.

There’s also a new 1.5-litre diesel – it may be cheap, but performance and economy are some way off the 1.6-litre diesel we drove.