How does the tiny 999cc engine perform in the impressive new Ford B-MAX mini-MPV? 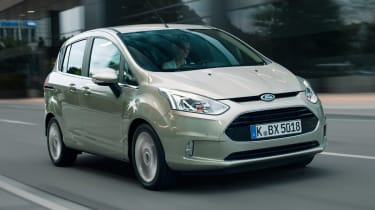 The pick of the B-MAX range – as long as the numbers work out for you. This little engine comes with a big price, as it’s only available in Titanium trim, but that shouldn’t put you off. You can get a 99bhp version for two grand less, but we like the pizzazz of the 118bhp engine with the luxury and style of Titanium specification. This is one clever family car.

It should be a match made in heaven: Ford’s brilliant three-cylinder 1.0-litre engine under the bonnet of the equally brilliant B-MAX MPV. Job done?

Let’s just take a minute to recap on the B-MAX. It is Ford’s rival to the likes of the Honda Jazz and Vauxhall Meriva and we gave it a rare five-star rating in our first test drive of the 1.6-litre diesel model.

It’s difficult to talk about the B-MAX without mentioning the doors. The fronts open normally– as do the rears, if you consider sliding rear doors as normal. (In a car this size, they’re exceptional.) Yet it’s what’s in between them (or not) that really sets the B-MAX apart in the mini-MPV class.

Open both side doors together and you’re faced with one huge, gaping hole. There’s no regular B-pillar connecting the floor with the roof and giving the doors something to cling on to. All that’s there is empty space, which makes getting in and out of the front or back a complete and utter doddle. Ford calls it Easy Access – and it is.

Why hasn’t anyone else thought of it? Because it’s quite complex and probably quite costly, too. Ford has put much of the strengthening from the B-pillar into the front and back doors, which are then joined to the bodyshell by some industrial-strength catches.

There are no worries about safety (the B-MAX has received the maximum five-star Euro NCAP rating) and no concerns about heavy doors, either – they open smoothly without much effort.

Just as innovative is that little petrol engine. With 118bhp, it’s more akin to a punchy 1.6-litre than something with three cylinders and 999cc. It’s quiet at idle and while cruising, then makes a lovely noise when you accelerate, which it does well.

It’s efficient, too, claiming an average of 57.7mpg and emitting just 114g/km of CO2. Oddly, it’s only got a five-speed box, but even that has a lovely easy shift.

More pluses include the ride and handling, which prove that comfort and fun can be happy bedfellows. The light engine makes the car feel more alert than the heavier diesel, too.

And in spite of being based on the Ford Fiesta, the B-MAX feels big, with lots of head and legroom all round, plus a decent-sized boot.