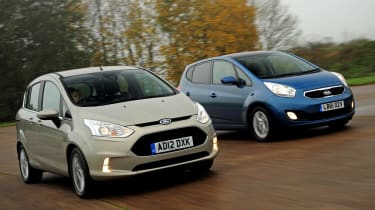 The supermini-MPV class has become very crowded in recent years, so it’s hard for a new model to get noticed these days.

Fortunately, the Ford B-MAX has a party piece in the shape of its B-pillarless body, which is sure to grab the attention of potential buyers. Creating a car with unobstructed access from windscreen to C-pillar meant overcoming some complex engineering challenges, but the resulting benefits are very clear to see.

Open both the hinged front and sliding rear doors, and you’re presented with a 1.5-metre opening that makes fitting child seats or climbing into the rear seats an absolute doddle.

Plus, aside from door runners in the rear wing panels, styling hasn’t been compromised by the clever set-up. Even more importantly, the strengthened steel side-impact structures needed for safety are built into the doors, so the Ford gets a five-star Euro NCAP rating.

In comparison with the sharply styled B-MAX, the Kia Venga looks underwhelming. But with a longer wheelbase, a wider body and totally flat rear floor, it has plenty of space in the back. Both sections of the 60:40 split rear seats slide forward and back independently, increasing boot and cabin space respectively.

Rear legroom is better than in the Ford, so it’s only ease of access that gives the B-MAX the edge – especially as the Venga’s 440-litre boot is 122 litres bigger. The Kia’s movable boot floor ensures a flat surface when the seats are folded, too. Still, the B-MAX’s rear seats tumble in one easy movement, while the front passenger seat also folds flat.

Climb into the driver’s seat and the Ford takes the advantage. The Fiesta-based cabin has a more sophisticated feel than the Kia’s. Material quality is decent, while the classy gloss-black Sony stereo, metal-finish climate control dials and ice-blue lighting all make for much more upmarket surroundings.

The Venga’s interior is well put together and the layout straightforward, but it feels low-rent compared to the Ford’s. To be fair, the Kia costs £1,920 less, but the Titanium B-MAX comes with a DAB radio, and Ford’s new SYNC phone and audio connectivity system. The Kia hits back with heated part-leather seats.

On the road, the B-MAX is a delight. Like the Fiesta, it’s very easy to drive and all the controls are perfectly weighted. The five-speed manual gearbox has a light and slick shift action, while the steering feels natural and very accurate.

The higher centre of gravity means the B-MAX doesn’t feel quite as nimble as the Fiesta, but it still handles and rides very well. In contrast, the Kia rolls more and the front tyres run out of grip sooner. But the way its stiff suspension jolts over bumps is more of a concern, while the artificially weighted steering is heavy either side of straight ahead.

The Venga’s engine isn’t very refined, but with 114bhp and 260Nm of torque available, the Kia has a big performance advantage over the 215Nm, 94bhp B-MAX. At the test track, it accelerated from 0-60mph in 9.7 seconds – 2.1 seconds quicker – and it was faster in all our in-gear tests.

Still, despite sluggishness at low revs and a relatively narrow power band, we’d always take the refined Ford over the clattery Kia.

The B-MAX’s 1.6-litre TDCi engine is also cleaner, emitting only 104g/km compared to the Venga’s 117g/km – although both cars were disappointingly thirsty on our test, averaging 39.2mpg and 41.6mpg respectively.

Lower CO2 emissions make the B-MAX a cheaper option for company car drivers, but Ford estimates 65 per cent of sales will be to private buyers, so residual values are more important. Our experts predict the 1.6 TDCi Titanium will retain 38.6 per cent of its value over three years – 3.7 per cent more than the Venga. But the Kia’s seven-year warranty is still a major draw.

Yet with its sliding doors and ease of access, the B-MAX brings something new to the mini- MPV class. And it’s not just a one-trick pony, either, delivering engaging driving dynamics, a very classy cabin and strong refinement.

So can Ford’s latest MPV match the success of its C-MAX and S-MAX siblings and take victory in the first of this tough trio of tests?