Can the new B-MAX compete with the more spacious compact MPV? 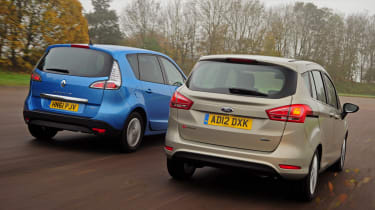 Ford believes that up to 60 per cent of B-MAX purchases will be ‘conquest sales’ – tempting buyers away from rival companies. A large number of those customers will be downsizing from larger models. But is this supermini-based car really a viable alternative to a bigger MPV such as the Renault Scenic?

For starters, it’s not much cheaper. The top-of-the-range B-MAX 1.6 TDCi Titanium costs just £1,330 less than the much larger £20,225 Scenic 1.5 Dynamique TomTom tested here. So is the family-friendly MPV’s extra space worth the extra money?

The Ford’s sliding doors are handy in tight spots, but there’s no escaping the fact the Renault is a bigger car: its conventional rear doors open up to reveal a very spacious cabin.

Three full-size rear seats all slide and recline independently and rear legroom in the back is far better than in the Ford. This makes the Renault the one to go for if you regularly carry three passengers in the rear seats.

Up front, there’s a centrally mounted digital dash and colour navigation screen, while updates have simplified the audio controls. Overall, the design looks upmarket. Some of the plastics in less obvious parts of the cabin feel a little cheap, but a lofty roof and large glass area make the Renault feel spacious and comfortable. Plus, the interior is bristling with clever stowage areas and other handy touches like tray tables and window blinds.

Which is just as well, as the Scenic can’t compete with the B-MAX’s sparkling driving experience. The controls lack the Ford’s superb natural weighting and feedback, plus the Renault isn’t as nimble as its smaller rival.

Still, the Scenic corners crisply with little fuss, and even though its ride is a little firmer than the Ford’s, it’s a comfortable choice. The 1.5-litre dCi engine is a bit rattly at idle, but noise is well insulated on the move and the Renault is refined on long motorway trips.

It’s faster than the Ford, too, thanks to an extra 45Nm of torque, for a total of 260Nm. While you’d be hard-pressed to notice it in most situations, the Scenic picks up a little quicker in-gear, which aids overtaking. The six-speed transmission also helps flexibility.

That doesn’t stop the Renault from being impressively efficient, averaging 47.5mpg on test. It also emits 105g/km of CO2, which means choosing the bigger car won’t result in painful road tax and fuel bills.

But poor residuals are a concern. On the plus side, Renault’s 4+ aftersales package offsets reliability worries and servicing costs. Overall, it’s easy to see why the Scenic is a popular choice – but the B-MAX’s clever touches could make up for its smaller size.