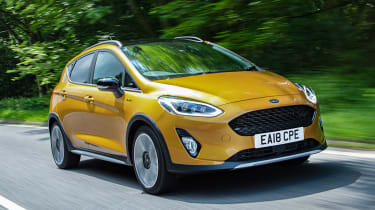 With only small mechanical tweaks over the rest of the range, the Active maintains all the Fiesta’s usual strengths with a little extra ride comfort. As accomplished as it is, the standard Fiesta is still the one we’d have because it’s better value for money. However, if you really love the mini-SUV looks or see a benefit in the extra ride height, the increased costs are only marginal across a monthly PCP deal.

It seems like the Ford Fiesta has been the UK’s best selling new car for an eternity – despite the fact it's a supermini, not an SUV. But with the various 4x4-inspired segments in such high demand, Ford has seen an opportunity to boost sales further with this: the new Fiesta Active. A mix of off roader-esque looks applied to the country’s most popular car is a nailed on sales hit, surely?

Ford has lofty targets for the Active, predicting 15 per cent of new all Fiestas will be specced up in its chunkiest configuration. It’ll be part of what’s set to become a three-strong lineup of Active models which also includes the Ka+ and, from early 2019, the Focus too.

The styling changes are typical SUV fare: there’s some sturdy-looking plastic wheel arches, extra trims on the bumpers, a set of roof rails and a smattering of Active badges. To complete the SUV look, the ride height has risen 18mm and the track widened by 10mm, giving a more burly stance overall. 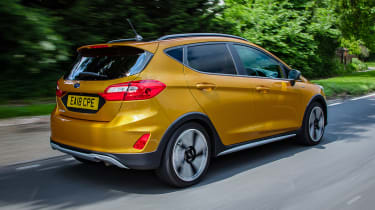 Inside, there’s not too much to separate the Active from the regular Fiesta. That's no bad thing though, because the dashboard is logically laid out, well built, and the eight-inch touchscreen runs Ford’s latest SYNC 3 infotainment system. If we’re being picky, a Volkswagen Polo still edges the Fiesta for both build quality and tech, but it’s not bad at all.

Standard roof rails aside, little has changed from a practicality point of to the standard Fiesta. That means that it’s got a great driving position and can seat five at a squeeze though, again, the Polo has it beaten in terms of both legroom and boot space.

Out on the road, that extra ride height does change the way the Fiesta drives, but not drastically so. Fortunately, it’s almost entirely good news: a new set of hydraulic bump stops up front take the edge off the worst impacts, particularly over potholes and large speed bumps. Noise from the suspension isn’t quite as well suppressed as in the Polo, but the Active is almost a match for smoothness.

It’s still more enjoyable to drive than a Polo, though. In fact, the changes have done little to dim the Fiesta’s sense of fun. It rolls through corners ever so slightly more than the regular car, but the wider track has helped to keep the same class-leading blend of composure and agility. The steering is accurate and well-weighted, too.

The 1.5-litre diesel engine is a solid match for the smoother character of the Active. It’s a refined unit by supermini standards, becoming a little gruff only under hard acceleration. In 118bhp form as tested here, it feels smooth and more than quick enough – helped by a six-speed manual gearbox with a snappy shift action. Ford claims this version will do 64.2mpg, which is maybe still a little ambitious - our test drive suggests a figure in the low fifties is more realistic.

There are three trim levels to choose from. The Active 1 kicks off the range, offering slightly inferior kit levels to a Fiesta Titanium (the Active gets larger alloy wheels but does without an eight-inch touchscreen and cruise control). The B&O Play does get that touchscreen, plus an uprated hi-fi, cruise control, and yellow interior trim. It also boasts a contrasting black roof and rails on the outside. The top spec Active X is closest in spec to the Titanium X, getting part leather seats and a range of driver assist systems.

You do have to pay slightly extra for the Active trim compared to the closest like-for-like standard Fiesta, but you’ll barely notice the difference over a three-year PCP deal. Comparing an Active B&O Play with a Titanium B&O Play on a similar agreement showed the Active to cost £4 more per month, with just a couple of hundred quid extra due at the end of the deal.