The jacked-up Ford Fiesta Active promises all the ability of the standard supermini in an SUV body, but is it worth the extra cash? 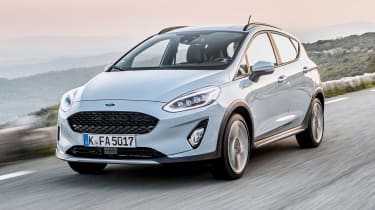 There’s no doubt supermini-sized faux-SUVs can be good cars – and the Ford Fiesta Active panders to that niche nicely. But for potential buyers not completely lusting over those rugged looks, there’s no avoiding that similarly specced and equally talented Fiestas are available elsewhere in the range for less.

The Ford Fiesta is Britain’s best selling car for good reason. It’s a supermini of many talents, ticking boxes for affordability, running costs, practicality and driving fun. The latest Fiesta ST promises to sail right to the front of the hot hatch pack too.

It’s no surprise to see that Ford thinks it can expand the Fiesta’s appeal even further, then – hence the addition of the new Fiesta Active. This SUV-inspired supermini says a lot about where the new car market has been moving over the last few years, and it could well be a package holding mainstream appeal. Especially compared to older curios like the Volkswagen Polo Dune and Citroen C3 X-TR.

Ford certainly thinks so. The firm predicts up to 15 per cent of Fiestas leaving UK showrooms could be jacked up Active models. It’s not just a single variant either, as three separate sub-trim levels are available – plus a healthy spread of powertrain choices. 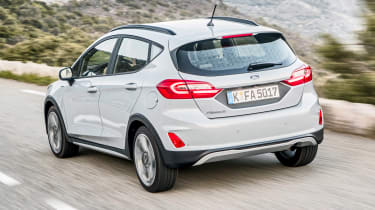 The basic Active – priced from £17,995 – is spun off neatly from the mid-range Fiesta Zetec, meaning a 6.5-inch SYNC3 display with Apple CarPlay and Android Auto is standard.

Our range topping version, which is badged Active X in the UK, gets the full eight-inch screen with sat-nav and a reversing camera. It’s a slick set-up to use and a massive improvement on older Ford infotainment units, though nothing particularly outstanding for the class. A partial leather interior with heated seats is also included, as is a 4.2-inch TFT display in the instrument cluster. By and large, it’s the same level of equipment found on the Fiesta Titanium.

Mechanically, the Fiesta Active rides 18mm taller than standard cars, while the suspension has been altered with bespoke settings for the springs and shock absorbers. Three selectable drive modes are included too, with a new ‘Slippery’ setting automatically adjusting the traction control and steering on wet surfaces.

Ford wants the Active to retain the fun to drive character of the base car – and we’re pleased to report that the firm has largely succeeded. The slightly more supple suspension setup means that the Active feels marginally more prone to body roll, but it’s still a taut drive. 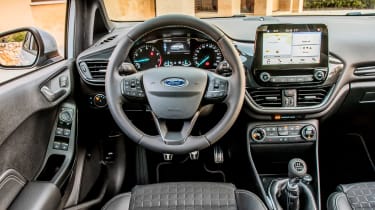 The raised ride height is offset by a 10mm wider track, intended to give the car a more imposing stance. But it also has the knock-on effect of retaining the Fiesta’s solid cornering stability. The ride feels composed at low speeds, too, but it’s still not quite enough to see the Fiesta challenge the VW Polo for outright comfort on the road.

Ford’s 1.0-litre EcoBoost turbo petrol is still a solid all-rounder, with peppy performance linked to impressive refinement. The 138bhp version – previously only available on ST-Line and Vignale cars – joins the Active’s roster. But there’s no avoiding the fact the 99bhp or 123bhp versions will likely suffice for most Active buyers.

It should be noted that regardless of engine, the Active’s tweaks result in a minor dip in fuel economy compared to the lower, standard versions of the car.