Sharper responses turn up the heat on supermini. But is it the best buy? 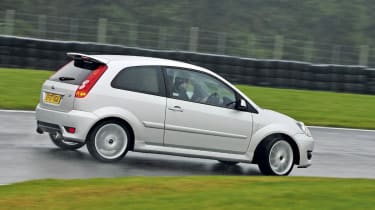 LAUNCHED in 2004, the Fiesta ST looks a little old-fashioned when compared to the Renault and Vauxhall. But the Ford’s solid and simple shape is still well proportioned. The mesh grille, deeper side sills, widened arches and reworked bumpers give it a sporty stance without the ostentatious detailing of the Corsa VXR. The ST185 kit doesn’t alter the styling – although look closely and you can spot some differences.

There’s a far smaller gap between the attractive 17-inch alloys and the wheelarches, and the large-diameter exhaust tip is a sign that this Fiesta means business. Developed by Mountune, an Essex-based specialist in tuning Ford powerplants, the ST185 upgrades can be fitted at a growing list of approved dealers.

The interior is left alone – only optional £950 Recaro leather seats lift a cabin that’s beginning to show its age. While the upper part of the dash is made of soft-touch materials, the plastics in other areas are brittle, and there’s no reach adjustment on the steering wheel, either.

The pedal area is also cramped, and there’s no room to the left of the clutch to put your foot when you are not changing gear. What’s more, those Recaro seats are mounted quite high in the Fiesta – both rivals have more adaptable and roomier driving positions.

Not that any of this will bother the many thousands of ST fans out there, because to them it’s what lies under the bonnet that makes this version so special.

These days, if a tuner wants to increase an engine’s power output, it usually plugs a new chip into the electronic control unit. However, the ST185 benefits from good old mechanical upgrades. You get a higher-lift camshaft, different valve springs and a bigger inlet manifold, plus an all-new exhaust system. As a result, the newcomer delivers 182bhp – instead of the standard car’s 148bhp – while torque has risen by 9Nm to 199Nm.

However, the updates only bring the Fiesta’s output up to a level similar to its rivals here, and we couldn’t get close to the claimed 6.9-second 0-60mph time in the wet conditions of our test. But on the road, the ST185 feels markedly quicker than the normal model.

The engine is more urgent above 3,500rpm, and it pulls considerably harder towards the revised 7,000rpm red line. It can’t match the low-down turbo surge of the Vauxhall’s unit, but while the standard ST felt breathless when compared to the Clio, it’s clear that the modified version is far more capable of keeping pace.

And with stiffer springs, supplied by German tuning expert KW, the suspension upgrade is equally impressive. The ST always had sharp and communicative steering, but with a 30mm drop in ride height, less body movement and tighter suspension, the 185 turns in with even more enthusiasm.

The compromise between front and rear grip is perfect, and the ability to adjust the Fiesta’s balance with the throttle in the middle of a corner is unrivalled. In addition, although the ride is harder, the damping is very good, so the Fiesta doesn’t fidget as much as the Renault on the motorway.

The standard brakes are more than capable of dealing with the increase in performance. But while the ST185 is faultlessly engineered and finely executed, the noisy exhaust and short gearing mean you have to sacrifice refinement when taking it easy.

And the upgrades don’t come cheap. The extras added to our car totalled £2,443 – and that doesn’t include the cost of fitting.

Price: £15,633Model tested: Ford Fiesta ST185Chart position: 2WHY: The ST185 gives the Fiesta the punch and prowess it needs to take on the best in the class.

Fuel costs won’t be the top priority of a hot hatch fan, but as the price of petrol rises, they can’t be ignored. We averaged 26.2mpg in the Fiesta, which compares to the official 38.2mpg combined figure for the standard ST.

The standard ST is predicted to retain 41.7 per cent of its value. And given that the 185’s modifications don’t invalidate the Fiesta’s warranty and are factory approved, they shouldn’t have a negative effect on second-hand values.

Despite having the oldest engine, the Fiesta emits the least CO2, at 177g/km. Company car tax is calculated on the delivery price, so its upgrades are exempt, as they are fitted as aftermarket parts – and lower-band business users pay £667 a year.

As standard, the ST has the lowest insurance premium here. But the Group 13 rating will be affected when you disclose the modifications to your cover provider. A specialist modified car broker will take the sting out of the price increase.