Thanks to its race-derived suspension, French baby is a strong contender. 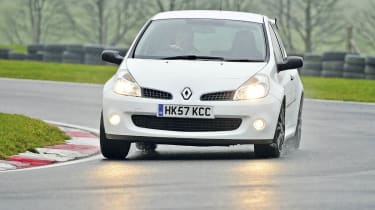 With its wider track and bulging wheelarches, the Renaultsport Clio 197 is one of the most attractive and purposeful hot hatchbacks money can buy. And yet the  French machine isn’t covered in attention-seeking stickers or unnecessary spoilers.

The rear diffuser is there to improve stability at speed, and the little vents behind the front wheels are subtle yet racy. Changes on the Cup model include a ride height that’s 7mm lower than the standard 197 and a tasteful badge  on the B-pillar. Our test car featured the  slightly more obvious roof-mounted £375  Cup rear wing, which is taken from the race  version. Even so, the Clio is more naturally appealing than the flamboyant Corsa.

And with the optional white paint and  black wheels of our car, the Renault looked  stunning, especially as the black mirrors and rubbing strips blend in perfectly. At £14,995, the Cup is £1,000 cheaper than the standard Clio 197, and is designed to appeal to those who desire driver involvement above all else.

As a result, the interior trim is the same as in the basic Extreme and Expression Clios, which means you lose keyless entry and starting, and get a conventional key instead. But little of  this matters really, because all the essentials of a great driver’s car are spot-on.

The seating position is excellent – there’s  a broad range of adjustment on the wheel,  while the pedals and gearlever are well placed. The Recaro seats are fantastic, too. They’re identical to those in the Fiesta, and prove  supportive and comfortable. As they’re mounted lower in the Renault, there’s  more space around the driver as well.

In fact, only the lack of standard air-con  lets the Cup down. It can be added for £525  if you’re not completely dedicated to the  pursuit of weight saving. And with 194bhp,  the Clio can cope with carrying the extra  bulk of an air-con unit under its bonnet.

Even though the Clio Cup can’t match the turbo Vauxhall’s punchy in-gear response,  it shares the Fiesta’s racy nature. There’s a  step up in power as the variable valve timing kicks in above 5,000rpm, and the normally aspirated unit takes on a howling, buzzing nature all the way to the 7,500rpm red line.

The trouble is, with peak power arriving even higher in the rev range than in the Ford  (at 7,250rpm), the Renault’s unit isn’t that  flexible. To get the most out of the powerplant, it has to be worked hard, and the transmission doesn’t help in this respect, as it has a slightly notchy shift action. Still, with six ratios, the  Clio is quieter at motorway speeds, as it  carries fewer revs than the Fiesta.

Don’t be fooled, though - on a twisty road and around Cadwell Park, the Cup is just as much of a thoroughbred hot hatch as the Ford. There’s a hard-edged, race-inspired accuracy  to the Clio. Body roll is virtually eliminated  and there’s masses of grip, which makes  it very reassuring to drive at the limit.

The Cup turns in just as quickly as the ST, but the slightly artificial assistance of the  Clio’s steering isn’t as pure as the Ford’s  more communicative wheel.

While there aren’t huge differences between the Cup chassis and the standard 197’s set-up, the former does feel more finely honed, and overall grip levels are even higher. The firmer damping hasn’t affected the ride, although as with the standard model, it’s harsh around town and jittery on the motorway.

So the Cup is a more focused version of an already great hot hatch, and the no-frills price tag means it’s fantastic value for money, too.

Price: £14,995Model tested: Renaultsport Clio 197 CupChart position: 1WHY: Cup version of the Clio 197 is the dynamic benchmark in the fast supermini sector.

The Clio recorded similar economy to the Fiesta, averaging 27.0mpg during its time with us. That’s closer to the official figure than the Ford, as Renault quotes a figure of 33.2mpg, and means a range of 327 miles

The Clio sits in Group 15, which is one level lower than the VXR, and its £348 premium is nearly £100 less than the Corsa’s. Both the Renault and Vauxhall get stability control as standard, which helps to keep insurance costs in check.